Premiere: The innovative robots for service, security and industry 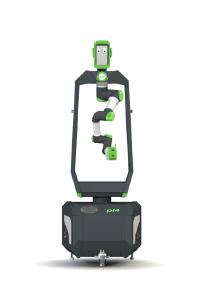 (PresseBox) ( Berlin, 16-06-15 )
Soon after pi4_robotics took second place in this year's Robotics Award at the Hanover Fair for the workerbot3 ™, the company presented already the fourth generation workerbot: at the Berlin Pop-up-Lab, which is presently touring Germany and caused excitement all week long in Munich. The lady robot 'yolandi.workerbot' ceremonially dropped her veils on the opening day, thereby presenting the new workerbot4 ™ generation to a wide public audience. In the subsequent autographing hour, she distributed set cards bearing her personal information and preferences to interested visitors.

With the fourth generation workerbot, pi4_robotics offers for the first time a generation of robots that has been specially conceived for service applications. The new workerbot4 ™ single-arm service and industry robot can be taught within no longer than one hour and is then then already fully available to perform the desired activity. Typical workplaces and tasks for the robot are: concierge, security guard, catering, ... The new robot generation can be used just as efficiently in factories, which pays off above all for smaller companies that only produce a small number of items. The robot can be used flexibly at different locations and can be rolled to the required workplace. The new multiple function gripper is offered with different functions, depending on the type of tasks to be performed. The workerbot4 ™ therefore has extremely versatile capabilitiesent, ranging from signing, through pressing operating system keys, right up to color recognition. Those who want to use the robot in catering can have it fitted with a gripper for liquid containers, along with a liquid level sensor. An avatar function is included in the versions security guard, concierge and AAL (Ambient Assisted Living: robotic assistance for older persons), by means of which the robot can independently connect to an alarm center. In the security area, the robot is able to detect and notify presence of explosives and radioactivity. Person recognition software supports the robot in searching for both persons and dangers.

Equipment for flexible location, which can be rolled to the workplace without additional means of support.

workerbot4 ™-industrial
workerbot4-industrial is ideal for processing small lots, for which the workerbot4 can be taught within less than 1 hour. This includes enabling the robot to serve measuring equipment or machines like a human, in that it presses keys and recognizes signal lamps.
Aside from this, there is location flexibility: workerbot4 ™ can be rolled to its workplace like a store trolley (max. weight including available options approx. 150kg)
Environmental aspects:
AAL version
Security version
workerbot4 ™ security can detect and notify presence of explosives and radioactivity via corresponding optional sensors. With its person recognition software, which can be coupled with e.g. police data banks, the robot provides support in searching for both persons and dangers.
Avatar function: workerbot4 ™ can make contact independently with an alarm center and thereby obtain support from humans, who can contact the person at the robot via the workerbot4 ™ sensor and actuation systems.

Second generation workerbot™ at work in the Neuruppin plant of PAS:
https://www.youtube.com/...