A completely new presentation style, live recording of the event, freshly grilled steaks, homemade cakes and salads made sure that this years' record breaking attendance were well catered for 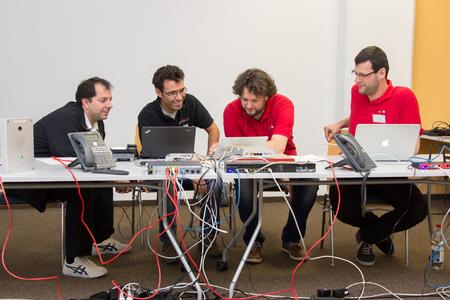 (PresseBox) ( Deggendorf, 14-06-05 )
IT meets BBQ - the IT BBQ highlight of the year - took place under the motto of "The Perfect Network" in Regensburg's IT Speicher. Even the bad weather could not dampen the mood of this years record attendance, who as part of this years event's new concept, were treated to a mix of expert workshops, hands on displays and of course as usual freshly grilled steaks, homemade salads, cakes and cupcakes!

The new concept split the event into 3 Demo Sessions, in which the integration of various IP technology groups within the MobyDick could be experienced live! The objective behind the new concept was quite simply to demonstrate how to implement a multi location installation of our asterisk based MobyDick IP PBX including the associated end user devices, secured location networking via VPN as well as central user management.

During the first session, Mathias Pasquay explained the basic setup, which included the setup of a MobyDick appliance and a beroNet Gateway. During a brief presentation, Christian Richter quickly introduced beroNet as well as presenting the new beroNet appliance. Among the first configuration steps demonstrated, were the connection of a beroNet Gateway and the simulation of an ISDN Trunk line, during which Christian Richter demonstrated how simple it is to monitor a Trunk line as well as how quickly troubleshooting can be carried out.

The second session included an introduction, delivered by Patrik Schaub FMS Internetservice, of Mikrotik products and their associated functions. Together with Quirin Pasquay, they setup a VPN network between the various locations. During this segment, great emphasis was placed on one of the hottest topics with the IP Technology world, which is of course Quality of Service, as this service is necessary in order to guarantee Call quality, even with larger data transfers.

Moving onto the third session, Christian Rapp from snom and Xenios C. Maroudas from StentofonBaudisch demonstrated how simple it is to integrate their respective end user devices within a MobyDick phone system. Not to be outdone by all the other excellent workshops, a Live Video feed from the IP-Video- Door Entry System of the StentofonBaudisch German Headoffice was then integrated into the new MobyDick FlexPanel, illustrating how employees based in a regional office can monitor and interact with the door entry system at the company headquarters.

As with the previous years, the event was brought to a close with the traditional freshly BBQ'd steaks, homemade salads as well as delicious homemade cakes and cupcakes - providing a well earn break from the workshops and filling the hole left by a hard day getting to grips with the latest IP technologies. Along with the recording breaking attendance, the new workshop concept, this years event had yet another premiere: the event was filmed Live, the session being posted on our YouTube Chanel under pascom events for all our customers and users who sadly were not able to attend the event.

To the Event Videos: http://goo.gl/G8BJAj

With over 15 years of experience we are your IT System House in the heart of Lower Bavaria. We have been providing our customers with IT Consultancy and Services in the fields of Networking Technology, Virtualization Solutions, Security and Voice over IP since 1997. We specialise in the support and advising of administrators, who are searching for tailor made solutions. Therefore, we are not about selling an individual product, but more about providing your IT Department with optimal support.

Additionally, we also develop our own Systems and Solutions. These include "MobyDick", our innovative Voice over IP Telephony Server and the already well established cafeteria software "MeinPausenbrot".

We currently have over 3,000 customers who use and rely on our specialised solutions, primarily from Medium to Large Enterprises as well as Public Sector Service Organisations.