Paradigma Group now also present in the USA and Bahrain 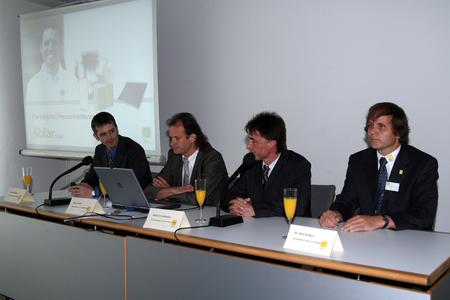 (PresseBox) ( Munich, 08-06-12 )
The company Paradigma, based in Baden-Württemberg, Germany, has been constructing large-scale solar thermal systems (SGAs) with CPC evacuated tube collectors since 2006, and its SGAs for process heat, cooling, hot water, and room heating are currently attracting rapidly growing interest from all around the world. "The unprecedented boom in demand which we are experiencing shows the extent to which the market has been waiting for really good collectors and concepts," says Dr. Rolf Meißner, Paradigma Divisional Manager for SGAs. "With high-performance CPC evacuated tube collectors as the high temperature motor, water as the heat transfer medium, and the SystaSolar Aqua solar controller, a concept is now available which is astonishingly simple, and therefore particularly appealing to investors and installers. At no cost to the customer, Paradigma reserves planning autonomy over the collector arrays with the AquaSystem, thus guaranteeing that every one of these systems exhibits a very high degree of functionality."

The implementation possibilities for the AquaSolar technology in SGAs range from solar expansion and partial solar heating, right through to process heat. The areas of application are correspondingly varied, e.g. apartment buildings, hotels, restaurants, spa facilities, hospitals, barracks, gyms, open-air swimming pools, or office buildings; and for process heat, e.g. washing units, barn heating, breweries, the foodstuffs and beverages industry, the paper industry, the leather industry, catering kitchens or cleaning companies - basically any facilities which require large volumes of hot water with temperatures up to a maximum of 130°C.

In the "AquaSystem", Paradigma consistently uses only water as the heat transfer medium, and protects the collectors against frost with low-temperature heat from the system. Due to the CPC evacuated tube collectors' low heat losses, this requires only a small amount of energy, totalling between 2% and 4% of the annual solar energy yield, which is compensated for several times over by the advantages of water and high working temperatures. With the Aqua principle, which has proven itself in around 25,000 small-scale systems, Paradigma has overcome the obstacles for SGAs. Here, it was previously the case that the high temperatures for process heat could not be achieved with flat plate collectors. The solar yield generated with "summer collectors" was far too low, and therefore uneconomical. In addition, operators were put off by the ageing and replacement of the heat transfer media. With an AquaSystem, the solar energy system works like an additional boiler with freely selectable temperature. Solar heat exchangers, antifreeze, and additional fittings become superfluous, which reduces the costs significantly. Overheating problems are a thing of the past, which facilitates generation of up to 130° of process heat. As it is of no concern if the system stands idle in the absence of heat consumption, it is possible to use small, efficient storage tanks. Excellent thermal stratification in the storage tank, and a minimal storage tank requirement ensure extremely rapid availability of the solar heat. Over the year, around 50% of the electric pump running time and pump energy is saved in comparison to conventional operation. The controller's comprehensive functional monitoring detects and reports faults immediately, and thus guarantees optimal operation.

To date, the promotion of SGAs by the German Federal Ministry of the Environment has not been based on output but on gross collector surface area. For Dr. Rolf Meißner, this is an obvious disadvantage for solar tube technology. He explains: "The worse a solar collector performs, the more subsidisation it receives in relation to its output. This severely penalises CPC evacuated tube collector technology, which brings the highest annual yields by far, and which is the only feasible option for many process heat applications. Furthermore, the subsidisation legislation only promotes inefficient seasonal storage tanks, which would completely fail in the applications addressed here, while highly efficient short-term storage tanks are not explicitly promoted at all." Here, according to Meißner, there is an urgent need for improvement.

Due to the global market's increasing requirements, the Paradigma Group (of which Paradigma Energie- und Umwelttechnik GmbH & CO. KG is the parent company) is currently intensifying its cooperative ventures in France, Poland, England, Ireland and Canada. Klaus Taafel, Managing Director of Paradigma, lists additional steps toward internationalisation: "We are currently setting up a branch in the USA where, thanks to subsidisation, the market for solar collectors is growing rapidly. This year, we will also exhibit here for the first time at the industry trade fairs Solar 2008 in San Diego and Intersolar North America in San Francisco. In addition, we are currently establishing a branch in Bahrain for the exciting solar thermal market in the nations of the Gulf Region."

With Paradigma S.R.L. and Shandon Linuo Paradigma Co. Ltd., the Paradigma Group (which includes the 100% subsidiaries Ritter Solar GmbH & Co. KG and RNO Kesselfabrik GmbH & Co. KG) already has subsidiaries and joint ventures in Italy and China. In the first quarter of 2008 (January to April), the Paradigma Group was able to sell a total of around 231,641 m² of gross collector surface area. By the end of 2008, this should be over 1,164,500 m², compared to 641,206 m² of gross collector surface area in the 2007 financial year.