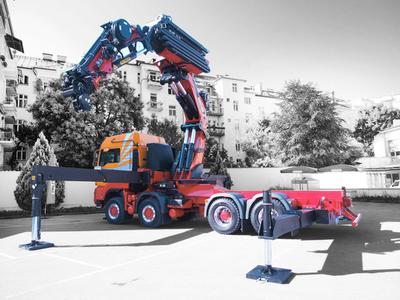 (PresseBox) ( Salzburg, 15-07-15 )
After the successful 2014 financial year, 2015 looks very good for PALFINGER as well. A new record is expected to be set in sales. The global market leader in truck loading cranes is making particular progress with the systematic implementation of its internationalisation strategy and diverse array of innovations. For example, only recently in June, PALFINGER launched a new generation of heavy-duty crane in the form of the PK 165.002 TEC 7.

The future looks very promising for PALFINGER. In 2014, the company broke the €1 billion mark in sales for the first time in its history. It managed this feat primarily through innovation and by implementing its internationalisation strategy. Outside Europe in particular, PALFINGER opened up additional new markets and thereby expanded its global market leadership in its core business – hydraulic loader cranes. This dedication is evidently paying dividends, as PALFINGER now has a global market share of more than 30 per cent for loader cranes. However, the company has also established itself as a leader in innovation and regularly launches new developments, such as the PK 165.002 TEC 7.

Only recently in June, PALFINGER introduced a new generation of crane in the form of the PK 165.002 TEC 7. The PK 165.002 TEC 7 combines strength with range and is designed for carrier vehicles with a maximum gross weight of 32 tonnes. This means that even when fully loaded, it remains within the permissible total weight, which saves time and expense on bureaucratic matters. Although it is one tonne lighter than its predecessor model, the PK 150002, its lifting capacity is 15 per cent higher, with a lifting torque of 125 metre tonnes. Not only that, but thanks to its maintenance-optimised overall system, it is very cost-effective. With this new crane and additional innovations in hydraulics, electronics and high-strength steel, PALFINGER will be expanding its position as a leader on the global market and in innovation.

The figures also show that the company is on the right track. A new sales record is expected in 2015. In the first quarter of 2015 alone, the PALFINGER Group recorded an extremely positive development, as sales grew by 10.7 per cent to €292.3 million.

For many years PALFINGER has been one of the world's leading manufacturers of innovative lifting solutions for use on commercial vehicles and in the maritime field. As a multinational group headquartered in Salzburg, the Company, which has approx. 8,030 employees, generated total sales of approx. EUR 1,063 million in 2014.