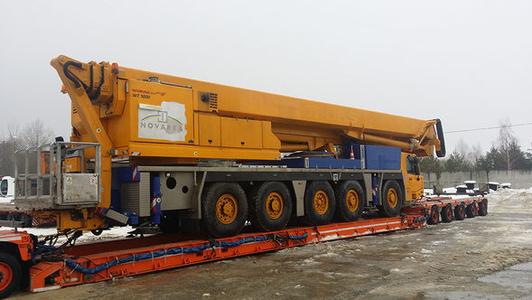 (PresseBox) ( Salzburg, 16-03-21 )
Twenty years after the reactor accident, hundreds of tonnes of radioactive material are still buried under a hastily constructed sarcophagus. A new structure is designed to replace the now crumbling construction and provide permanent protection against radioactive contamination. A PALFINGER WT 1000 is in operation on the construction site for the new sarcophagus for the nuclear reactor ruins in Chernobyl. Following its deployment under these most challenging of conditions, the access platform has now temporarily returned to Krefeld for a general overhaul – anything but a routine situation.

Around 500 metres away from the former nuclear reactor, up to 4,000 people at a time are working on a huge dome – the „sarcophagus“. It is around 120 metres high and will be finished by the end of 2017. It will then be placed over the ruins and is designed to prevent radioactivity from escaping for the next 100 years. The WT 1000 is the perfect tool for all the work at height that needs to be carried out. The access platform is used continuously – 24 hours a day, seven days a week. In the extreme cold of winter and the summer heat. Three years of non-stop operation under the most challenging of conditions mean that a general overhaul is now urgently required.

But for this to take place, the access platform had to be transported back to Germany. Such extensive work could not have been performed in Ukraine. “This was new territory for us. First, we had to deal with the radiation and safety regulations,” explains service manager Michael Mandel: “We didn’t want to take any risks.” After talking with authorities, doctors and radiation protection experts, a PALFINGER employee travelled to Ukraine. Radiation measurements before, during and after the visit, protective clothing and a strict code of conduct were essential.

These were the most complex maintenance preparations PALFINGER has ever made: „We drew up transfer plans with Novarka, the construction consortium, and the authorities,” explains Mandel. The most important requirement for transporting the device to Germany was to make sure it was not contaminated with radioactive material. The radiation measurements, however, confirmed that the machinery was harmless. On 3 February, the WT 1000 finally arrived (subject to stringent safety regulations) in a specially hired hall in Krefeld, and the overhaul began. In addition to the replacement of all the hydraulic hoses, the chassis also had to undergo a full service. The “Queen of the skies” is set to resume work in Chernobyl at the start of May.

For many years PALFINGER has been one of the world's leading manufacturers of innovative lifting solutions for use on commercial vehicles and in the maritime field. As a multinational group headquartered in Salzburg, the Company, which has approx. 8,995 employees, generated total sales of approx. EUR 1,229.9 million in 2015.