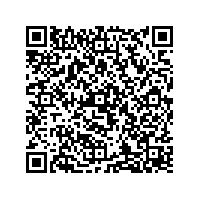 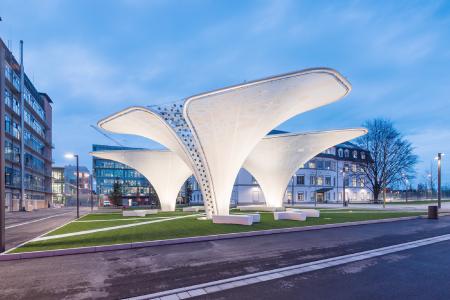 (PresseBox) ( Kitzingen, 18-04-04 )
The original OPV Solar Trees of the German Pavilion at the EXPO 2015 world exhibition in Milan have been reinstalled in Darmstadt. This makes them an architectural highlight of the redesigned entrance area of Merck KGaA in Darmstadt and, true to the EXPO motto “Feeding the Planet – Energy for Life“, they have been put to permanent use.

They were an architectural highlight at Expo 2015 in Milan – the Solar Trees fitted with an Organic Photovoltaic System from OPVIUS (at that time BELECTRIC OPV GmbH). On the roof of the open and inviting German Pavilion, entitled “Fields of Ideas“, visitors were able to relax beneath the trees and admire the unique concept.

The cooperation between OPVIUS GmbH, Merck KGaA, Carl Stahl GmbH, Hager SE, Schmidhuber Architekten and U.I. Lapp GmbH supported by the Federal Ministry of Education and Research led to the world’s first architecturally fully integrated PV system based on flexible printed OPV modules. To underscore the lightness of the modules and create an optical energy of light and shadow, the modules were fitted into a honeycomb steel mesh. The hexagonal form not only underscored the technical application of OPV, but also reflected this application optically. Fitted with connection technology from Lapp and connected to storage system from Hager, the Solar Trees stored energy during the daytime which then flooded the German Pavilion with light at night-time.

When EXPO ended in October 2015, the question of what to do with the trees remained. It was obvious that the Solar Trees needed a fresh use. Merck then asked Carl Stahl and OPVIUS to adjust the OPV system with regard to durability, the weather and higher snowfall in Germany. Three of these optimised OPV Solar Trees now stand in the redesigned entrance area of Merck KGaA in Darmstadt.

The Solar Trees are conspicuous, extraordinary objects that bring innovative technology, economic use of resources and space, and modern architecture together into a single natural dimension. The original idea behind the Solar Trees was to consolidate the important aspects of life quality and sustainability in the fields of architecture and design. This objective cannot be attained if the world’s very first implementation of this idea finds no sustainable use. “The Solar Trees are the first exhibits in which OPV has been printed in industrial production. This is a milestone in the development of the technology.“, explains David Müller, Head of Photovoltaic Marketing at Merck. “Therefore we are proud that they now decorate the southern entrance to our head office in Darmstadt.“

In 2015 the Solar Trees represented the seeds to a different future of solar technology: integrated, virtually invisible systems which – based on Organic Photovoltaic – make use of surfaces that are not accessible to classic PV technologies. Facades offer a lot of space for climate-friendly electricity production from sunlight. But because this always results in a visibility of the product used, the malleability and ultimately the design of the applied technology assume much more importance.

“Thanks to our developments we can shape OPV modules so that they are fully compatible with modern architecture and can thus be integrated perfectly. The EXPO project with Solar Trees was the first one where the form and appearance of the voltaic system as dictated by the architect, not by the technology available.“ says Hermann Issa, Senior Director Business Development and Sales. “The project was certainly the first and only one to use Organic Photovoltaic to such a large extent. But the really decisive factor is that it demonstrated a completely new understanding of energy generation: the generation of electricity, harmoniously integrated, at the very location where it is consumed. And we are all the happier because it has now been transferred to a sustainable use.“