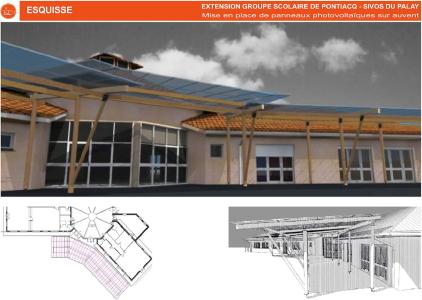 (PresseBox) ( Kitzingen, 17-03-29 )
If you want to combine a safe, reliable renewable energy source with stunningly beautiful aesthetics, the answer is Organic Photovoltaics. This revolutionary technology is about to make a step-change: the world’s first large-scale polycarbonate laminated OPV modules, produced by OPVIUS, have been delivered to the Communauté de Communes Adour-Madiran (CCAM) in France ready for installation in heritage and cultural sites where traditional PV modules are often excluded from installation.

CCAM, Pau, France and Kitzingen, Germany – A clear vision, designed with purposeful French style, these new elements from OPVIUS strike a pose in the bright sunlight, producing enough energy to power computers and fridges in schools and kindergartens. The OPV modules generate energy and protect people from the harsh southern sun in the summer and from the slashing hail and sleet in the winter. They are as easy to install as standard polycarbonate sheets – a common construction element adaptable to many building styles.

Making this vision happen OPVIUS has started delivery of the world’s first large-scale polycarbonate laminated OPV modules to CCAM. These panels are part of the first shipment of more than 700 in total, which will be installed around the CCAM region in several independent projects to demonstrate the aesthetics, functionality and adaptability of Organic PV to local needs and weather conditions.

The freedom of OPV design makes it easy to place the OPV elements as sun and rain shades on metal and wooden frames, and as decoration on roofs and vertical walls in small villages and large towns. They are available in individual color and shape to fit in discreetly with sensitive cultural sites, respecting local cultures and environments, which opens the possibility of a steady, modern power supply even in ancient cultural centers. As well as being non-intrusive, OPV panels are non-toxic and entirely recyclable, making them an acceptable technology renewable energy in all built environments.

Moreover, approval has already been granted for OPV modules to be incorporated into public buildings where standard PV modules are banned. Conventional silicon PV modules are excluded from many French villages cause their appearance clashes with local classified monuments, historical architecture and France's rich cultural heritage, an important part of country's life and tourism. But thanks to OPVIUS, OPV-based modules can now be installed in those villages that have turned down other panels because of planning restrictions.
“We were intrigued by the endless possibilities of OPV installations right from the start,” says Mr. Patrick Baylère, Project Manager for the OPV projects at CCAM. “Our centers reflect the culture of construction of smaller villages in Southern France and any technology that is applied needs to fit in with that and adapts to the situation. Moreover, some projects are sensitive to the preservation of sites of historic interest. OPV adapts to this situation and offers solutions instead of creating issues. Our will has been to ensure that each building produces more energy than it consumes, and in this process, give local craftsmen the opportunity to work with this new technology.”

This work is strongly supported by the IPREM, which initiated the project. Dr. Roger Hiorns said: “While we are well-involved in the technical side of OPVIUS’s modules, we are really looking forward to expanding our education program. In complete harmony with COP20 and COP21 agreements, we are participating in bringing a new renewable energy into the hands of local people and giving them the power and information to decide what they want to do with it. This is an extraordinarily exciting period for OPV, and we’re very proud to be able to participate in its development with our partners.”

“For us it has been important to provide solutions that can be adapted to local buildings, especially in places of historic interest. With our solar active and aesthetic version of polycarbonate sheets, we come pretty close to that,” commented Hermann Issa, Senior Director of Business Development and Sales at OPVIUS.

OPVIUS GmbH, a German company with offices in Nuremberg and Kitzingen, is the market leader in the area of organic photovoltaics. OPVIUS produces bespoke organic solar cells and systems, tailored to customers’ specific requirements. Furthermore, OPVIUS is active in the area of research and development, in order to continuously provide their customers with creative and innovative solutions. Additionally, OPVIUS employs a unique manufacturing process, based on a combination of printing, lamination and laser structuring processes. These give a distinct advantage due to their high scalability and, moreover, allow the implementation of custom designs. OPVIUS supports its customers with the integration of OPV in existing as well as new products and delivers the accompanying system solutions.