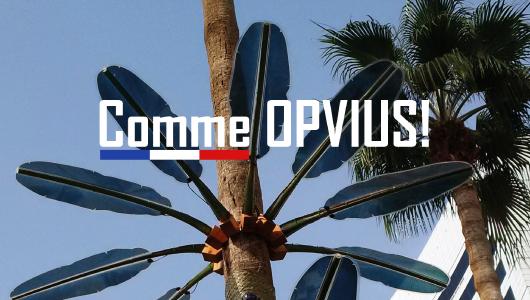 (PresseBox) ( Kitzingen, Germany / Nantes, France, 19-05-14 )
OPVIUS and ARMOR today announce the signing of a Letter of Intent to merge OPVIUS development, integration and marketing activities for flexible organic photovoltaic films with those of ARMOR. A major common objective:  to pool know-how in order to become the global benchmark company in flexible organic photovoltaic technology. The new entity would combine the French mid-market company ARMOR's industrial production capacity for ASCA® film (1 million m2 per annum - the highest in the world) with the organic photovoltaic film integration experience of the German company OPVIUS, as demonstrated by its numerous application projects. The merger would enable ARMOR to accelerate the deployment of its solar innovation projects and mark a major step in establishing a position of global leadership in flexible organic photovoltaics to meet the challenges of energy transition.

With the integration of OPVIUS, ARMOR is set to pass a major milestone in its objective to become the global leader in the flexible organic photovoltaics market. ARMOR today announces the signing of a Letter of Intent for OPVIUS to be integrated within its Armor Beautiful Light division, the manufacturer of ASCA® flexible organic photovoltaic films. The two companies have set a deadline of July 2019 to negotiate the takeover.

"This Franco-German merger would unquestionably create the global market leader in flexible organic photovoltaic film. ARMOR has the largest production capacity in the technology and OPVIUS enjoys extensive experience integrating film within real applications. Lightweight, flexible and free of rare metals, the ASCA® solar film opens up a whole array of innovative application possibilities. This is excellent news for the future of the solar energy sector", explains Hubert de Boisredon, CEO of ARMOR.

“Combing OPVIUS’ unique OPV free-form manufacturing technology and product integration know-how with ARMOR’s industrial strength and unrivaled manufacturing capacity is a one-off opportunity” adds Dr. Ralph Pätzold, CEO of OPVIUS GmbH. “Thanks to the complementing skills of both partners the resulting setup will allow taking OPV business to the next level and being ready to enter volume market in the very near future.”

Founded in 2012 in Germany, in Nuremberg for R&D and in Kitzingen for production,

OPVIUS is the market leader in the integration of flexible OPV (organic photovoltaic) solar technology. With some 100 clients and projects in 15 countries worldwide, it enjoys rare expertise that enables it to integrate flexible organic photovoltaic films into multiply materials including but not limited to textiles, polycarbonate, glass and ETFE.

OPVIUS is a pioneer in numerous architectural projects: solarization of the diplomatic headquarters of the Peace and Security Council of the African Union in Addis Ababa (Ethiopia), installation solar sunshades at the Thüringen State Horticultural Show (Germany) and the covering of multiple buildings in Germany. The company differentiates itself from all other global operators in the flexible organic photovoltaic film market by its proficiency in free-form technology, which allows for artistic creativity to produce customized and original photovoltaic shapes in a variety of colors, such as leaves, crystals and specific designs supporting the high added-value architectural preferences of leading designers.

ARMOR, the strength of a robust manufacturer

ARMOR markets the ASCA® organic photovoltaic film. Its operational production capacity of 1 million m2 per annum is the world's largest. The French company draws its strength from its 100 years of know-how in ink formulation and roll-to-roll coating of fine layers on thin films. This has enabled it to become the global market leader in the sale of thermal transfer ribbons for barcode labels and variable printing on packaging, with a production capacity of 1.7 billion m2 of film. Its complete control over the industrial process for the ASCA® film safeguards its commercial deployment. The translucid film is already sold for a range of applications, such as street furniture with JCDecaux and agricultural greenhouses in partnership with Eiffage Energie. Multiple projects are currently being examined for diverse structures: public buildings, schools, industrial, sites, etc. Many of the biggest international energy companies are closely investigating the potential of the ASCA® film as its low weight and flexibility enable complementary developments to traditional photovoltaic panels, notably on fragile roofs, building facades and metallic-textile structures. The ASCA® film also offers innovative solutions in back-up energy solutions or as a sensor for connected objects.

The acquisition of OPVIUS would enable ARMOR to accelerate the development of its organic photovoltaic film business, with a revenue objective of over €100m by 2025. The spin-off of ARMOR Beautiful Light, with its capital being opened up to investors, is also being examined in order to support the investment required to develop the organic photovoltaic technology and support future sales growth. A fundraising target of €40m has been set between now and 2020.

ARMOR specializes in the industrial formulation of inks and the coating of thin layers onto thin films. The Group is the global market leader in the design and manufacture of thermal transfer ribbons for printing variable traceability data on labels and flexible packaging. The European market leader in innovative and sustainable printing services and consumables, the Group is a pioneer in the development and production of industrial inks and innovative materials, such as organic solar films, coated collectors for electric batteries and bespoke filaments for additive manufacturing. With an international presence, ARMOR has nearly 1,900 employees in some 20 different countries.  In 2018 it posted annual revenue of €265m. Each year the group invests nearly €30m in R&D. ARMOR is a responsible company committed to stimulating innovation within society. www.armor-group.com

OPVIUS is part of the HOCH.REIN GROUP, an international, medium-sized investment holding with the aim to promote entrepreneurship. The fields of business activity encompass the areas "New Technologies", "Industrial Production", "Real Estate & IT Services" as well as "Alternative Energies & Trading".