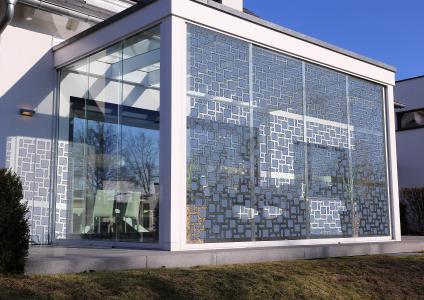 (PresseBox) ( Kitzingen, 20-04-24 )
ARMOR has just reached an important milestone in the production of its flexible organic photovoltaic film, ASCA©. In early April, the company announced that it has produced free-form photovoltaics, merging for the first time its fields of complementary expertise, namely full-width modules coating, by the team based in La Chevrolière in France, and their finishing – including laser structuring – to obtain free-form modules, by the German team working at OPVIUS, a company that joined ARMOR in 2019, and which is based in Kitzingen and Nuremberg. This innovation opens up a new range of application possibilities for its organic photovoltaic film, ASCA®, establishing a new channel for the implementation of ARMOR's co-industrialization business model.

In early April, the company announced that it has produced free-form photovoltaics, merging for the first time its fields of complementary expertise, namely full-width modules coating – from formulation to production – by the team based in La Chevrolière, near Nantes, and their finishing - including laser structuring - to obtain free-form modules, by the German team working at OPVIUS, a company that joined ARMOR in 2019, and which is based in Kitzingen and Nuremberg.

This technological prowess, resulting from the successful on-going merger with OPVIUS, enables ARMOR to consider new applications for its ASCA® photovoltaic film. Thanks to free-form technology, the ASCA® film can now take on shapes only limited by your imagination. Bespoke and original, flowing into specific designs it makes the high added-value preferences of leading designers and architects a reality. Furthermore, ARMOR can produce one million square meters of its photovoltaic film annually, now including free form modules.

For several decades now, ARMOR's growth has been based on co-industrialization, consisting of international growth supported by production in France. For the Thermal Transfer market, in which it is the global market leader, the company produces semi-finished products in La Chevrolière, near Nantes in France, which are then further processed at industrial slitting units located on all the world's continents. "With the acquisition of OPVIUS, we are making serious plans to replicate our co-industrialization model within our photovoltaics business by coating full-width films in France followed by their finishing close to our customers and in accordance with their specifications", states Hubert de Boisredon, CEO of ARMOR. "The world's energy needs are immense. With the world's largest capacity and two years of production experience that has enabled us to stabilize the process, we are now ready to produce our ASCA® organic photovoltaic film in large quantities to be able to rapidly and flexibly meet the demands of new markets while creating employment in Europe", he concludes.

ARMOR specializes in the industrial formulation of inks and the coating of thin layers onto thin films. The Group is the global market leader in the design and manufacture of thermal transfer ribbons for printing variable traceability data on labels and flexible packaging. The European market leader in innovative and sustainable printing services and consumables, the Group is a pioneer in the development and production of industrial inks and innovative materials, such as organic solar films, coated collectors for electric batteries and bespoke pieces and filaments for additive manufacturing. With an international presence, ARMOR has nearly 2,000 employees in some 20 different countries. In 2019 it posted annual revenue of €280m. Each year the group invests nearly €30m in industrial equipment and R&D. ARMOR is a responsible company committed to stimulating innovation within society.

Die Verknüpfung von Microsoft Teams mit der eigenen Telekommunikationsanlage stellt viele Unternehmen vor Herausforderungen. Wir listen Möglichkeiten auf, wie die Integration gelingen kann. read more
The publisher indicated in each case is solely responsible for the press releases above, the event or job offer displayed, and the image and sound material used (see company info when clicking on image/message title or company info right column). As a rule, the publisher is also the author of the press releases and the attached image, sound and information material.
The use of information published here for personal information and editorial processing is generally free of charge. Please clarify any copyright issues with the stated publisher before further use. In the event of publication, please send a specimen copy to service@pressebox.de.