Onlineprinters GmbH is among the 25 German "COUNTRY REPRESENTATIVES" 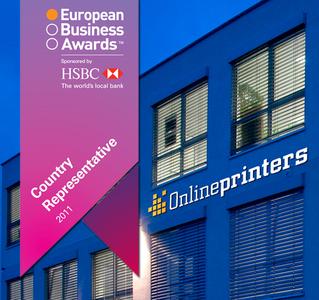 (PresseBox) ( Neustadt an der Aisch, Germany, 11-05-19 )
Onlineprinters GmbH has been nominated to represent Germany in the European Business Awards 2011 as "Country Representative" together with 24 other companies. "Having been nominated in this European competition is a great honour for our company" Walter Meyer, CEO of Onlineprinters GmbH, is thrilled to announce. From around 15,000 relevant European companies, an independent jury selected the 25 best-case companies in Germany to recognise their excellent dynamic growth and outstanding business development over the past years. The nomination of Onlineprinters GmbH as "Country Representative" in the category "The Award for Customer Focus" accounts for the successful development of the e-commerce business.

Internationalisation in e-commerce is being expanded consistently

Founded in 2008, Onlineprinters GmbH has become one of the biggest online shops for printed products in Europe within a few years. "Based on the idea to market printed products solely via e-commerce, the company has evolved from a one-man business to one of the biggest online print shops in Europe employing around 300 people" Walter Meyer documents the successful rise of Onlineprinters GmbH in the competition of the European e-commerce players. The Bavarian enterprise is positioned successfully in 30 European countries with its German online shop diedruckerei.de and the English- and French-speaking versions of the shop at www.onlineprinters.com. We are preparing to offer the online shop in other languages as well. Adrian Tripp, Chief Executive of the European Business Awards, is full of praise: "Each year we are witnessing impressive performances of some excellent companies with brilliant success stories. This has again been the case this year. The quality of the applicants has increased again as has the number of applicants. The companies that have been nominated Country Representatives are thus the crème de la crème of European companies. They will represent their companies in the next round of the European competition to compete for the coveted Ruban d'Honneur.

"Europe is our strong growth market. By continuing to internationalise our web shops, we aim to achieve even more customer focus", CEO Walter Meyer highlights a major success factor of the fast-growing market of the online print shop. Customers use the online shop to order conveniently from a comprehensive range of top-quality printed products at reasonable prices. The capacities of the Bavaria-based production and sales facilities of Onlineprinters GmbH are being expanded continuously. Nine million euros were invested into expanding the company in 2010. Additional investments amounting to six million euros are planned for 2011. "The European Business Awards are widely recognised as the showcase for Europe's most dynamic companies. We're looking forward to the second round of the competition where we'll be competing across Europe to receive a Ruban d'Honneur and hopefully win", Walter Meyer said.

About the European Business Awards 2011

The European Business Awards sponsored by HSBC recognise excellence, innovation and best practice in Europe. The Country Representatives are selected from 15,000 companies in 28 countries. The Country Representatives will then be judged by an eminent panel of economists, academics, business leaders, politicians and media owners. They will evaluate the entries and select the top 100 scoring companies to become Ruban d'Honneur recipients, to be announced on 28th July. The winners of the Ruban d'Honneur will be honoured in a ceremony taking place in Barcelona on 22nd November, where the overall European Business Award category winners will be revealed. For a full list of the Country Representatives, go to http://www.businessawardseurope.com/...