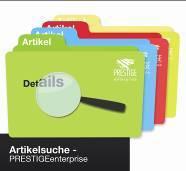 (PresseBox) ( Weinheim, 10-10-12 )
Online Software AG announces the sales start of PRESTIGEenterprise Release 3.1 for the price communication and advertising at the point of sale (PoS). Highlights of the Release 3.1, ready for sale from 4th of October 2010 are the new timer and energy saving functions, comfortable server modules for text blocks and mobile devices as well as extended language functionalities thanks to Unicode capable PEX-Import and language support of Simplified Chinese.

More sustainability in digital signage: With the energy saving mode "night mode" a time frame can be assigned for each screen connected to PRESTIGEenterprise with Release 3.1. The screen changes to standby mode for the duration of the time window and will boot up again after it has elapsed. In this way PRESTIGEenterprise customers can cleverly save electricity and optimally implement Corporate Governance regulations about Green IT and sustainability.

The timer function was extended with Release 3.1. Playlists can no longer only be recorded at fixed times, but can also be repeated in a defined rhythm. The timer function therefore enormously simplifies the time planning for presenting the playlists - no matter whether it's punctually before the kickoff of football matches or even exactly on the hour for the "offer of the hour".

With the optimum additional module "text blocks" PRESTIGEenterprise-users not only avoid annoying spelling errors or false product details, but also save time by avoiding duplication of work. Using "text blocks" pre-defined expressions and texts can be stored and articles can be assigned in a text library. This facilitates a uniform description and design of product features as well as product groups and ensures the company a consistently professional appearance in the article descriptions.

With Release 3.1. the server module "MobileBrowser" presents itself significantly extended: It is now possible to change playlists and their device allocation via mobile devices such as the iPhone, Windows Smartphones or Pocket PCs. For this purpose the MobileBrowser supports the operating systems Windows Mobile, Apple iOS, Android and the web browsers Firefox, Internet Explorer and Apple's Safari. The MobileBrowser is therefore an ideal tool for store managers, who want to carry out sales promoting adjustments - e.g. for perishable goods - without any detours to the office. Via the WLAN network of the branch the store manager can hereby access PRESTIGEenterprise with hismobile device and can carry out the changes ad hoc. Thanks to the support of the Apple operating system iOS the development of further individual apps is possible. The apps access content that is stored in PRESTIGEenterprise.

PRESTIGEenterprise Release 3.1 is now also available with a Chinese user interface (Simplified Chinese). Comfortable for PRESTIGEenterprise users, who want to transfer their existing template texts during the migration from PRESTIGE to PRESTIGEenterprise: the Unicode capable PEX import. It also masters the error free transfer of special characters in languages such as Russian or Greek. A correct import of texts integrated in templates from ANSI based PEX files is therefore ensured even in the case of varying regional settings.

Price labelling, poster printing and Digital Signage in one application: PRESTIGEenterprise by Online Software AG is the most widely-used program for cross-media communication at the point-of-sale (PoS). Using PRESTIGEenterprise, retailer may design and print labels, shelf stoppers, posters and poster walls up to output on electronic displays. The software distinguishes itself with its intuitive usability and many additional functions. PRESTIGEenterprise offers features that are a crossprinting function for recipe and coupon printing directly at the sales counter, a simpler and more flexible creation of playlists for display monitor advertising and provides more advisory skills for sales staff with the Live Info & eLearning Center. The software PRESTIGEenterprise is awarded with the viscom award as the best European Digital Signage solution, and by EHI with the RETA Europe award for the best customer solution for digital PoS advertising.

Online Software AG is a modern, innovative software company focussing on the development of solutions for the international wholesaler and retailer. Online is the market leader in the area of professional branch advertising with the poster and labelprinting software PRESTIGE having over 31,000 installations in 35 countries and in 20 languages. Online supports his customers in cross-media marketing of products using the market-leading PRESTIGE software. PRESTIGE supports all kind of media such as posters and shelf labels, as well as new technologies only to mention flat-screen monitors, kiosk systems, scale systems or touch screens even using RFID to trigger an event.