Save energy and costs with intelligent steam boiler monitoring 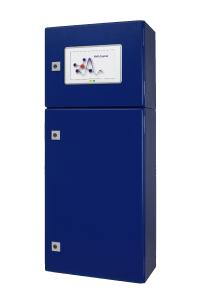 (PresseBox) ( Ronneburg, 21-05-07 )
For example, in industrial companies with larger amounts of condensate, effective cost effects can be seen with just a few adjustments to the processes.

The German printing service provider Prinovis GmbH & Co. KG set itself the goal of reducing its use of steam and chemicals at its Dresden plant in Germany. There are three large-capacity water boilers each 5 MW and two gas engines each 5 MW and a downstream waste heat boiler. Then the FWO-Control was subsequently installed on the feed water boiler. This only monitors the feed water boiler and the inhibitors and controls the vapor valve. With its operational management and the additional installation of a control valve at the steam outlet of the degasser dome, a needs-based, energy-efficient operation was implemented.

In order to avoid undesirable reactions in the steam boiler, conditioning agents are only added when necessary. The automatic, constant measurement and monitoring of the feed water ensures that the conditioning agent is dosed as required. The boiler water is continuously analyzed and optimized. The pH value, residual oxygen content and conductivity are constantly checked. The figure shows that fresh water was introduced into the feed water boiler, which reduces the conductance and increases the oxygen content. Simultaneous alkalization increases the pH value sharply and decreases over time, which is due to the mixing in the entire container. Analogously, the conductance increases again and the oxygen content also decreases.

The addition of chemicals to the feed water boiler, adjusted on the basis of the measurements, leads to a reduction in the resources used by up to 60%. The result is that a higher degree of thickening is achieved in the steam boiler. This results in a reduction in the desalination quantities of up to 40%.

Constant monitoring means that there is a very dynamic response to load fluctuations. Controlled activation of the vapor valve leads to a reduction in steam losses of up to 80%. Because the needs-based degassing of the feed water, the degassing is now only activated if additional water or condensate is actually pumped into the feed water vessel via the degasser dome.

Evidence of these measurement results is evident from the continuous recording of the data in the electronic operating log. The measured values and process data are also clearly visualized on the display at a glance. If service requirements are recognized and there is a need for rapid optimization, the automatic function control immediately triggers an alarm. Networking to higher-level control centers and remote maintenance is also possible as an option. This ensures constant operational and process reliability.

At the German company Prenovis, after operating the system for more than a year, a positive conclusion can be drawn. The steam consumption for degassing could be reduced by over 50% and the use of chemicals by 50%. This means that the system has paid for itself in less than a year.

Overall, the balance sheet can be drawn for the FWO-Control that the resource and energy savings lead to higher process reliability, better energy efficiency and lower operating costs.

OFS GmbH is a medium-sized company with decades of expertise in industrial water treatment. Our goal is the environmentally conscious use of water as a resource. Our products include analysis, monitoring and control systems for process water and cooling / air conditioning water. Our requirements for operational and process reliability, economy and environmental friendliness set new standards. As a developer and system manufacturer, we have all the strings in our own hands and offer customer-specific overall solutions.

Determine potential in the operation of steam boilers