For the past six months, NovaStor has continuously expanded its international network and customer base. 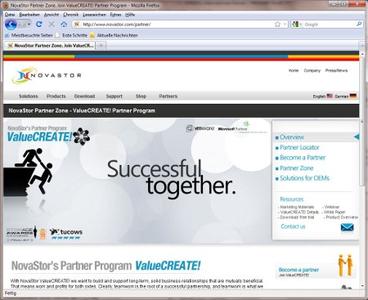 NovaStor: Exclusive Backup Software and Alternative to Acronis
NovaStor’s data protection software for small and medium companies, enterprises, and heterogeneous networks, as well as its platforms for public and private cloud backup, convince resellers and distributors with its ease of use, high stability and excellent price-performance ratio. Among its satisfied resellers is E-Data, a distributor specializing in data security. E-Data has chosen to exclusively distribute NovaStor’s backup products to the Turkish market.

NovaStor also prides itself on being a cost effective alternative solution to Acronis. Purple Rage Software, a UK wholesaler, has replaced Acronis True Image with NovaStor’s product line for home users and small to medium sized businesses for its reliability and affordability.

New Distributors in Poland and Lithuania Increase NovaStor’s Presence in Eastern Europe
Since June of this year, NovaStor is represented in Lithuania by distributor, Atviros Informacin?s Sistemos (AIS). With NovaStor, AIS adds software for data protection and availability including cloud platforms for managed service providers to its existing IT security software portfolio. In addition, Sun Capital, a backup distributor in Poland, also relies on NovaStor's expertise in data protection for small and medium enterprises.

NovaStor Accesses African and Middle East Markets
Advantec, a hardware distributor specialized in storage for the United Arab Emirates and the Middle East, expands its portfolio for the very first time with a software product, choosing NovaBACKUP for single workstations and servers. It was crucial in their decision making process to include flexible and stable software in their portfolio. NovaStor offered exactly that and also supported their customer service and support requirements.

With CMIT, a provider of hardware and software IT solutions, NovaStor has won the first distributor to provide NovaStor’s data backup solutions, NovaBACKUP Business Essentials and NovaBACKUP Network, which protect servers including SQL and Exchange as well as heterogeneous networks, to resellers in South Africa.

NovaStor software regularly receives awards and praise from independent experts for its user-friendliness, rich functionality and great price-performance ratio. Its most recent awards include the Consumers Digest Best Buy Award in 2011 as well as the Top Ten Reviews’ Gold Award for Windows Server Backup.

NovaStor attaches great importance to building and maintaining solid business relationships. To demonstrate this, NovaStor’s ValueCREATE! Partner Program serves as a guideline for distribution cooperation and aims to assure mutual growth and benefits for its partners, resellers and distributors. NovaStor’s teamwork, personalized account management, comprehensive support services, and free training programs are the foundation of its partnerships.

NovaStor (www.novastor.com) is a leading, international provider of software solutions for data availability and protection. NovaStor provides software, SaaS solutions and services for local and online backup, restore and retention of business-critical data. Clients include home, mobile, and SMB users, service providers as well as international corporates. NovaStor's cost-effective solutions are platform- and hardware-independent and ensure that optimal technological and economical use is gained from the customer's existing and future IT environment.

NovaStor is headquartered in Switzerland (Zug), has offices in Germany (Hamburg) and the USA (CA, Agoura Hills), and is represented in numerous other countries through partnerships.