2.1 trillion turnover and 18.3 million employees in the European Bioeconomy – comprehensive data and graphics available for the first time 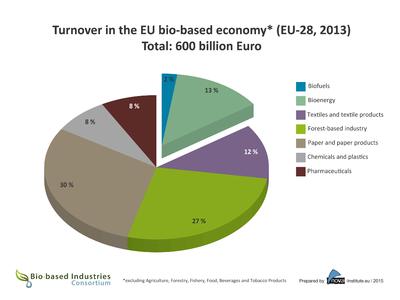 (PresseBox) ( Hürth, 16-03-03 )
The bioeconomy comprises those parts of the economy that use renewable biological resources from land and sea – such as crops, forests, fish, animals and micro-organisms – to produce food, materials and energy. A new study now shows which macroeconomic effects are generated by these activities, e.g. turnover, employment etc. The data, generated by nova-Institute on behalf of the Bio-based Industries Consortium (BIC) will be updated annually.

The analysis of the Eurostat data of 2013 shows that the turnover of the total bioeconomy, including food and beverages and the primary sectors agriculture and forestry, results in 2.1 trillion EUR in the EU-28. Roughly half of the turnover is accounted for by the food and beverages sector, almost a quarter is created by the primary sectors, agriculture and forestry. The other quarter is created by the so-called bio-based industries, such as chemicals and plastics, pharmaceuticals, paper and paper products, forest-based industries, textile sector, biofuels and bioenergy.

The bioeconomy employs 18.3 million people in total. The primary biomass production, mainly agriculture plus forestry and fishery, generates a lot of employment (58%) but low turnover (21%). The data show clear differences between groups of Member States: e.g. the Eastern European countries Poland, Romania and Bulgaria apparently are stronger in less value added sectors of the bio-based economy that generate a lot of employment. In comparison, Western and Northern European countries generate much higher turnover compared to the employment generated. The countries with the highest ratio between turnover and employment are Ireland, Finland and Belgium.

“Of particular interest,” so Michael Carus, Managing Director of nova-Institute, “are the often underrated bio-based industries, such as chemicals and plastics, pharmaceuticals, paper and paper products, forest-based industries, textile sector, biofuels and bioenergy. This sector shows considerable turnover of 600 billion EUR and 3.2 million employees in 2013 for EU-28.”

With regard to investments, the last annual survey from the end of 2014 showed that BIC members intended to invest 1.1 billion EUR during 2014 to 2015 in bio-based industries – mainly demo and flagship projects, of which more than 820 million EUR were pure private investment. Private investments in the amount of more than 2.1 billion EUR are in the pipelines of those same BIC members for the time between 2014 and 2020. Most of the short-term investments will take place in the lignocellulosic and forestry based value chains.

The full report can be downloaded here: www.bio-based.eu/markets

For additional data on the bio-based economy, even on Member State level, please contact michael.carus@nova-institut.de from nova-Institute directly.

About nova-Institute
nova-Institute is a private and independent institute, founded in 1994; nova offers research and consultancy with a focus on bio-based and CO2-based economy in the fields of feedstock, techno-economic evaluation, markets, LCA, dissemination, B2B communication and policy. Today, nova-Institute has 25 employees and an annual turnover of more than 2 million €.

nova-Institute is a private and independent institute, founded in 1994; nova offers research and consultancy with a focus on bio-based and CO2-based economy in the fields of feedstock, techno-economic evaluation, markets, LCA, dissemination, B2B communication and policy. Today, nova-Institute has 25 employees and an annual turnover of more than 2 million €.

Urgent need for a reasonable regulation of cannabidiol (CBD) in food, cosmetics, as herbal natural medicine and as medicinal product