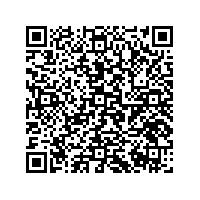 NOEtop S goes through a baptism of fire in the con-struction of the "Salle de Sport" at Quai de la Moselle in Calais, France 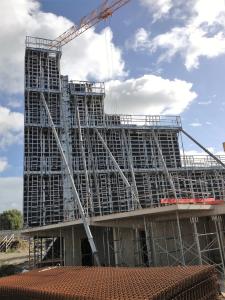 (PresseBox) ( Süssen, 17-05-08 )
The Salle de Sport, a sports hall with static and lowering spectator stands, is being built in Calais. The substructure supporting the static stands consists of triangular fair-faced concrete walls which are left open in some areas and have an abrupt change in the vertical direction. In order to create this shape in concrete, the project team decided to use NOEtop S wall formwork.

Calais is a well-known ferry port for crossings to the United Kingdom. But the coastal city has much more to offer. In addition to wonderful countryside, the visitor to Calais can see some noteworthy architecture – such as a 2400 m² multisports hall currently being built in the heart of the city. It lies directly adjacent to the Quai de la Moselle and is immediately noticeable for its extensive glass facade. The state-of-the-art hall will be the venue of sports events such as basketball, volleyball and handball matches. The building has static and lowering stands to allow up to 1500 spectators to follow the games in comfort. The substructure for the static spectator seating is in fair-faced concrete and was constructed with the help of NOEtop S panels, a task which fell to contractor Demathieu Bard from Montigny-les-Metz. NOE France – Téchnique de Coffrage, St. Quentin, France, a subsidiary of NOE-Schaltechnik, Süssen, Germany, is the partner of the main contractor on this project.

Reach the heights in stand construction with NOEtop S

The complexity of construction is apparent only at second glance, because the substructure of the 150-m-long static spectator stand is actually made up of triangular concrete walls. The walls are spaced about 7 m apart. They are a maximum of 11.50 m high and have a width of 18 m. Openings at various points in the walls lend a sense of airiness to the structure and allow visitors to walk under the stands. The walls also have a kink – a sudden change in vertical direction – which posed another challenge during construction. The project team decided to use NOEtop S wall formwork to safely fulfil this tall order.

On this project, the extremely robust NOEtop S system (the S stands for safety) got its first chance to prove its true versatility. It was developed especially for use in countries with particularly high site safety standards. Working platforms with all-round safety rails, ladder access and stabilizers are attached directly to NOEtop S large area panels and are supplied to site ready for immediate use. Simply fold out the working platforms and align the stabilizers – and NOEtop S is ready for use. It requires only to be folded up again before being moved to the next site. The safety devices do not have to be dismantled or removed for transport or storage.

NOE offers a number of different panel sizes for the NOEtop S panel system, which means the user can always create the most appropriate panel joint pattern. The XXL panel with dimensions 5.30 x 2.65 m is the largest frame formwork panel available on the market and allows more than 14 m² of concrete to be formed without a single panel joint mark. Other advantages of NOEtop S are its ease of handling and extreme durability. All frames and profiles are hot-dip galvanised inside and out. The tie rods can be freely positioned anywhere within the bracing. The GSV-tested formwork can withstand a concrete pressure of 88 kN/m².

NOE-Schaltechnik also offers a number of additional modules to extend the system's scope of application. Examples include the adjustable internal and external corner modules. They produce clean-cut corners for angles much greater or less than 90° and were crucial to the decision to use NOE products on the Calais site. The corner connection is patented and is noted for its smoothly operated adjustment mechanism, which allows the corner to be set to almost any angle. Replaceable PU corner strips in the external and internal corners prevent cement grout from leaking out. The highly aesthetic appearance of the concrete continues in the corner areas, which was paramount at Calais because the concrete is left open to view.

In addition, the hinges on the corner modules never become stuck with hardened concrete. This reduces the work involved in cleaning and servicing the formwork to a minimum. The smoothly operated adjustment mechanism makes formwork erection and stripping considerably easier. The system allowed the contractor to construct the kink in the walls without additional complications. However, one more challenge remained to be overcome.

A way still had to be found to place and compact the concrete in the unusually shaped walls. Without the use of additional elements, the concrete would have to have been self-levelling and the triangular shape narrowing to the top would have been practically impossible to form. To achieve this, the contractor fitted suitable void-formers inside the formwork which would hold the concrete in the required triangular shape. A similar approach was also used for the wall openings. Specially fabricated void formers were fitted here. The contractor took only two months to complete the structural work. As soon as the building opens, the games will be able to take place in an attractive environment and watched from the stands.