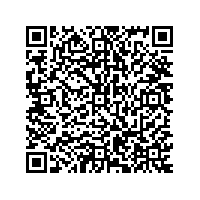 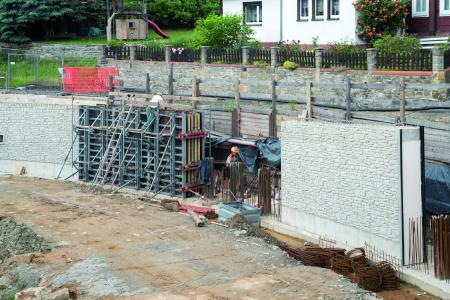 (PresseBox) ( Süssen, 17-05-19 )
The floods of August 2013 damaged an important retaining wall dating back to 1901 in Großschönau, Saxony. Although some parts could be reconstructed, certain sections had to be replaced by new concrete walls. These new walls had to look like old masonry. As a result, the local council responsible for Großschönau decided in favour of a textured formliner from NOE-Schaltechnik, Süssen. The manufacturer offered the main contractor, Bau GmbH Franke, Hainewalde, a formwork system that would make his work considerably easier and supply a visually superior result than would have been possible with an ordinary formwork system.

Großschönau is a district in the administrative area of Görlitz, Saxony and has a history of flooding. This happened most recently in 2013, when the Mandau, a small river, broke its banks. The huge flow of flood water damaged not only cellars and gardens, but also an important retaining wall. This wall was erected in 1901 and protected a public access road. After all the debris and mess from the flooding had been removed, it quickly became clear that the retaining wall had been badly affected. Part of the wall could certainly be repaired, however, other sections were so seriously damaged that they would have to be replaced. The new sections were to be constructed in reinforced concrete (class C 30/37; exposure classes XC4, XD1, XF2, XA2) and, at the wish of the listed structures authority, it should look like the existing masonry.

This meant that the new 0.65 cm thick retaining wall sections should have the surface relief of a random rubble natural stone masonry wall. To achieve this look, the main contractor called upon textured formliners manufactured by NOE-Schaltechnik. The manufacturer markets them under the name NOEplast and has an extensive range of standard designs available. NOEplast textured formliners can give concrete the surface texture of, for example, wooden boards, bush-hammered concrete or even plaster. The "Murus Romanus" motif was chosen for the retaining wall in Großschönau. This textured formliner is approximately 4.1 cm thick and comes in standard sizes or of 6.00 x 2.50 m. It can also be manufactured and supplied to larger dimensions. The formliners have matching sawtooth edges that allow them to be butted together without an obviously visible joint.

For forming a textured surface in concrete using NOEplast in a precasting works, it is enough to place the formliner in an appropriate form on the vibrating table. For in-situ site work, such as in Großschönau, it has to be glued to the formwork. Then the concrete is poured and compacted. As soon as the concrete has achieved adequate strength, the formwork including the formliner can be removed to reveal the selected texture. The special feature of NOEplast standard textured formliners is that they have a glassfibre fabric backing, which ensures they are robust and minimises dimensional changes due to temperature fluctuations. Moreover, the formliners can be used up to 100 times, which drastically reduces the price per square metre of concrete surface on a project.
On the Großschönau site, NOE supplied only 36 m² of Murus Romanus textured formliner, which were then used up to 8 times. NOE-Schaltechnik is in a position to supply its customers with a quite unique service.
It the only manufacturer that can supply companies with textured formliners already glued in the factory onto formwork or supporting boards that can be screwed to the formwork panels. Bau GmbH Franke preferred to use this service in Großschönau, where the formliners – at the suggestion of the NOE team – were not fixed to standard wall panels but to NOE Combi 70 panels.

This formwork system is stiffened by 70 cm deep galvanised light truss girders. The girders are spaced at centres of 100 to 150 cm. The system is highly resilient because the tie rods are positioned 10 cm above the top of the foundation and at a height of approximately 290 cm, which is usually above the top of the wall. The actual formwork element consists of a grillage of multi-hole channels and vertical NOEtop edge profiles attached to a 21 mm thick basic panel facing. To this can be attached any conceivable kind of formwork liner for producing fair-faced concrete – such as, for example, NOEplast textured formliners – and subsequently screwed into place. Because the retaining wall in Großschönau does not run in a straight line, but to a certain extent follows the course of the river, it was decided to make the structure follow these curves with the help of the formwork. The curve was idealised as a polygonal chain and the NOE Combi 70 units installed on a series of angled straight lines. The curved shape was achieved by incorporating timber spacer pieces sawn to taper at the appropriate angle. The special feature of the NOE Combi 70 system is that it can be used to construct fair-faced concrete surfaces up to a concreting height of 290 cm, with practically no tie rod holes to be seen. The horizontal positions of the two butted elements were set using spindles and the formliner at that point was made from one piece so that no butt joint appears in the final exposed surface. In addition, the NOE Combi 70 units can be placed one upon the other up to a formwork height of 450 or 600 cm, which was very beneficial to the construction work on site at Großschönau. The retaining wall starts at a height of 2.80 m and increases to a height of 4.30 m at the other end. For construction, the 84 m long wall was divided into 14 segments. Flexible movement joints were installed at approximately 6 m centres with front and back water stops.

The contractor originally intended to construct the retaining wall with conventional wall formwork. However, this would have had the disadvantage that considerably more tie rod holes would have been visible and the curved wall alignment would not have been as elegant. Instead, the engineers at NOE's Cottbus subsidiary suggested the adjustable variant in their tender – an option which is possible only with NOE Combi 70. The client found this proposal most convincing. Although Bau GmbH Franke had never worked with NOE before, the main contractor decided to adopt NOE's solution. In order to ensure that the concrete components achieved the desired high-class appearance, it was essential that the formwork supplier and the main contractor worked closely together. For example, some bays had to incorporate openings of various sorts, which were taken into account during the design and fabrication of the formwork so that only the relevant parts of the panels needed to be removed and reinserted as necessary. NOE worked closely with the main contractor to draw up and implement all the details at the construction joints (continuous surface) and around pipe outlets (masonry spout detail). The main contractor's site team were so impressed with the products and services supplied by NOE-Schaltechnik during the construction of this project that Bau GmbH Franke placed a follow-up order with the formwork manufacturer very shortly afterwards. A company could wish for no greater praise.