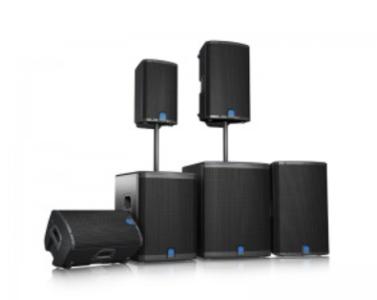 An industry first, the iQ Series features "Acoustic Integration", enabling digital mixers, personal monitor systems and loudspeakers to communicate directly with each other via the Company's proprietary ULTRANET Technology. Another first for the iQ Series is the sophisticated speaker modelling capability, which lets users call up preset frequency contours that emulate the sound of 10 of the world's most iconic loudspeakers.

Acoustic Integration puts more control at the user's fingertips, allowing them to make dramatic changes to overall sound system performance - in real time, without ever leaving the mixing desk. Users can easily set up and adjust parameters directly at the loudspeakers, or remotely via mixing console, PC or tablet running downloadable apps.

Perfect for FOH and floor-wedge applications, the iQ15, iQ12, iQ10 and iQ8 two-way loudspeakers are lightweight, portable, and provide premium-quality sound. Added support for low-frequency performance comes from the iQ18B and iQ15B subwoofers, which provide exceptionally deep and powerful bass. All enclosures feature standard 35 mm pole-mount sockets, for deploying dynamic full-range systems that are ideally suited for even the most demanding sound-reinforcement applications.

"Our design objective was advanced integration between our growing digital mixer family and this new, high-performance loudspeaker line," said Andrew Pardoe, Senior Manager, Innovation, Acoustics. "The iQ Series is an industry first, thanks to the powerful digital audio networking via our proven ULTRANET technology."

The iQ Series is affordable enough for small to medium-size venues, such as theaters, schools and houses of worship - yet powerful enough to easily accommodate festival stages, dance clubs and convention center corporate events.

For more information on the Turbosound iQ Series, visit booth #5244 at Winter NAMM 2015.

Turbosound is a leading designer and manufacturer of professional loudspeaker systems. The company's award winning designs are defined by a harmony between high technology and an instinctive approach to the art of acoustical and electronic engineering. Since inception a number of principle patents have been awarded to Turbosound including three Queen's Awards for Export Achievement in 1987 and 1997, and for Innovation in 2012, which recognise the success of two ground-breaking design concepts - the Polyhorn and Dendritic waveguides. Both now form the heart of Turbosound's core product ranges - Aspect, Flex Array and Flashline loudspeaker systems. Turbosound has also applied its design principles and patented technology to the specialist requirements of the fixed installation, theatre, worship, corporate and A/V markets.

Turbosound is owned by Music Group.

The Music Group is one of the world's largest pro audio and music products companies. As the corporate parent for world-recognized brands such as Midas, Klark Teknik, Turbosound, Behringer and Bugera, the Music Group owns and manages some of the finest brands in the industry. With a solid platform of technical innovation, proprietary Intellectual Property and unparalleled brand equity, Music Group companies and brands lead the market in over 130 countries across the globe.

Music Group products are designed and developed by over 250 dedicated members of the industry's most accomplished engineering team, spanning three continents. Our products are built and thoroughly quality tested in our own state-of-the-art factory Music Group City where we control every aspect of the supply chain and manufacturing process. The result of this intensive commitment to quality is that Music Group products are trusted by millions of users every day to produce and perform to exacting specifications and tolerances.