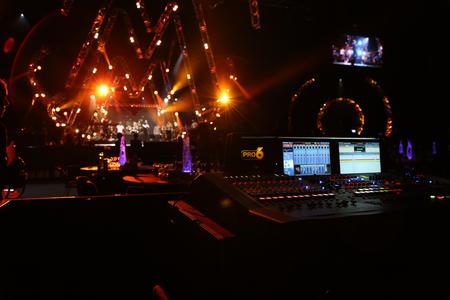 Nico Royan, system engineer and designer for Britannia Row, describes the system design: "The set was far wider than I would have liked. To easily cover the room the system comprised main hangs of 12 Flashline TFS-900H four-way line array boxes a side with three Flex Array downfill boxes underneath. For the side hangs I decided on eight Flashline a side, and for delays I had six Flex Array a side, just to refresh the top seats."

In addition Royan specified eight Flashline TFS-900B subwoofers per side. "Howard Smart and Danny Cooklin from TURBOSOUND have developed a new cardioid preset for the subs and I'm extremely impressed with it. It's eliminated almost all of the low frequency that was coming out the back, which is really very helpful."

Royan also added compact two-way TQ-308s along the monitor shelf, just for lip fill for the central area. Over to the side of the main performance stage, where the MOBO Awards were presented to the winners, Royan specified two small stacks of Aspect point source loudspeakers: "This was because the presenter platform was right in front of a big hang of Flashline," he explains. "To solve this I routed the presenter output so it only fed the top part of the flown array, and then used the Aspect to take over to cover the floor."

Dave Compton, account manager for Britannia Row discusses: "We've been providing sound systems to the MOBO Awards for more than ten years now. It presents the ideal opportunity to put a good new system in front of the engineers and say 'try it out, have a listen.' The response has been very positive from both the artists and from their engineers. Technically Flashline's a fantastic solution for the diverse array of music being presented."

And Greg Ryan, FOH engineer for Tinie Tempah and Iggy Azelea agrees: "I used the TURBOSOUND Flashline system on the Wireless Festival earlier this year for Tinie and also on Whizkids, and I was captivated. We were in the big dance tent and tents can be difficult at the best of times. The Flashline system sounds really good, it's really in your face and with real detail and accuracy even 50 or 60 metres away."

TURBOSOUND's Danny Cooklin concludes that the new cardioid sub performed beyond expectations, and found favour with the production crew and artists: "System coverage was good all over the venue - quite an achievement bearing in mind the complexity of the set and seating arrangement. Although the bass stacks were fairly far apart we were pleased with the performance of our latest cardioid settings," he comments. "In front of the stacks the bass was clean and tight, with a significant reduction in level behind. We are currently also working on a number of new bass configurations and we are looking forward to testing and rolling them out in the near future."

TURBOSOUND is a leading designer and manufacturer of professional loudspeaker systems. The company's award winning designs are defined by a harmony between high technology and an instinctive approach to the art of acoustical and electronic engineering. Since inception a number of principle patents have been awarded to TURBOSOUND including three Queen's Awards for Export Achievement in 1987 and 1997, and for Innovation in 2012, which recognise the success of two ground-breaking design concepts - the Polyhorn and Dendritic waveguides. Both now form the heart of TURBOSOUND's core product ranges - Aspect, Flex Array and Flashline loudspeaker systems. TURBOSOUND has also applied its design principles and patented technology to the specialist requirements of the fixed installation, theatre, worship, corporate and A/V markets.

NinjaRMM wollte in einer Studie wissen: Mit welchen Herausforderungen sind IT-Verantwortliche tatsächlich konfrontiert? Wie stellen sie Effizienz, Skalierbarkeit und Flexibilität sicher, um ihre Services zu verbessern? read more
The publisher indicated in each case is solely responsible for the press releases above, the event or job offer displayed, and the image and sound material used (see company info when clicking on image/message title or company info right column). As a rule, the publisher is also the author of the press releases and the attached image, sound and information material.
The use of information published here for personal information and editorial processing is generally free of charge. Please clarify any copyright issues with the stated publisher before further use. In the event of publication, please send a specimen copy to service@pressebox.de.