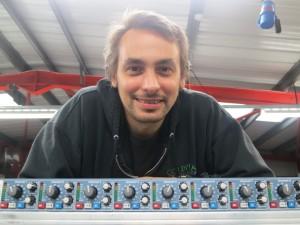 (PresseBox) ( Manila, 14-04-15 )
The Midas XL48 has quickly become the go-to, add-on microphone preamp for Wigwam Acoustics Ltd. In fact, the company is proud to be the first UK rental facility to offer the 8-channel microphone preamp within its rental stock. Wigwam, part of the SSE Audio Group, is one of the world's leading sound companies for rentals, sales and installations - and also a long-time Midas/Klark Teknik user.

"Since we bought it, our Midas XL48 has constantly been in use" says Alex Hadjigeorgiou, Wigwam's resident digital specialist. "McFly, Steps and Ronan Keating have all toured with it, and it's my favorite way of adding eight extra channels to any mixing console, partly because I don't have to "sell" the idea to the engineer. They all respect Midas preamps, especially the XL4 preamps!"

"Hadj", as he's known to his friends, recommends and uses the XL48: "If the main console has 48 mic inputs, but the requirement is up to 56, adding an extra stage rack for just a few extra mics can be expensive and inefficient. Instead, the XL48 provides the extra inputs via any spare analog line input on the console. In addition, all five outputs can operate simultaneously - two AES, two ADAT and line level analog. There is a lot more to the XL48 than just eight mic pres in a box!"

Speaking to the XL48's build quality, Hadj continued, "It comes in a solid, metal case; the rotaries and switches are robust and feel right - and it has a versatile, but straightforward, word clock. And since it comes from Midas, you know the XL48 is road-worthy and worry free."

"Wigwam has a well-respected history as the professional leader in major artist and touring production equipment for hire, and offers sales and installation to their customers as well," stated Graham Rolands, Music Group's VP of Professional Division: "The XL48 is based on the legendary XL4 microphone preamps and is considered the industry's best preamp. We are getting incredible feedback and customers praise the XL48 for its amazingly pure and transparent sound. We are extremely proud to work with the prestigious Wigwam company and the fact that the XL48 has now become part of their standard operating equipment."

Midas builds live performance mixing consoles that have been used by the world's most demanding sound engineers, performers and rental companies since 1970. The company is dedicated to raising the standards of sonic quality through its programme of continual research and development and stringent manufacturing processes. Midas engineers are also focused on implementing new control functionality and user-friendly desk operation to anticipate and accommodate the ever-evolving needs of audio professionals who specify MIDAS consoles for their major tours, festivals, international events, broadcast projects and prestigious fixed installations.

Klark Teknik was founded in 1971 and in the years immediately following, their innovative approach to design and development allowed them to introduce some truly groundbreaking designs. Klark Teknik was responsible for one of the world's first digital delay and digital reverb units; however it was their concepts for equalisation devices that really changed the world of professional audio resulting in the DN370 and the famous DN360. Today Klark Teknik continues to bring innovation in design and dedication to engineering and sonic quality in both the analogue and digital realm of signal processing.

MIDAS and Klark Teknik are owned by Music Group.

Wigwam Acoustics Ltd, the largest Sound Hire network in the UK, are based in Heywood, north of Manchester, UK. Established in 1979, Wigwam's enviable client list includes a wide variety of major artists from Coldplay to George Michael to JLS and an impressive portfolio of special events including the Isle of Wight Festival, The International Eistedfodd and Billy Graham Missions Worldwide.

The Music Group is one of the world's largest pro audio and music products companies. As the corporate parent for world-recognized brands such as Midas, Klark Teknik, Turbosound, Behringer and Bugera, the Music Group owns and manages some of the finest brands in the industry. With a solid platform of technical innovation, proprietary Intellectual Property and unparalleled brand equity, Music Group companies and brands lead the market in over 130 countries across the globe.

Music Group products are designed and developed by over 250 dedicated members of the industry's most accomplished engineering team, spanning three continents. Our products are built and thoroughly quality tested in our own state-of-the-art factory Music Group City where we control every aspect of the supply chain and manufacturing process. The result of this intensive commitment to quality is that Music Group products are trusted by millions of users every day to produce and perform to exacting specifications and tolerances.