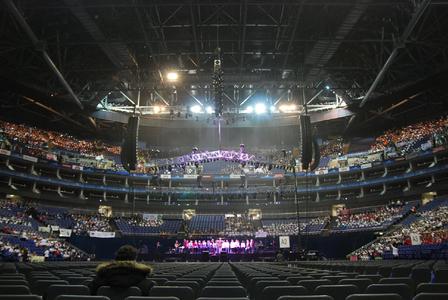 (PresseBox) ( Manila, 14-04-07 )
Britannia Row Productions once again chose Turbosound's Flashline line array speaker system in January this year as the main sound reinforcement for the annual tour of Young Voices, a series of concerts featuring a full band and a choir of several thousand primary school pupils performing at major arenas throughout the UK.

Young Voices is the largest school choir experience in the world. From all across the UK and Ireland, over 100,000 children every year, along with stars like Alexandra Burke, Lemar, Des'ree, Keith Semple and Beverley Knight, with the dedicated support of over 10,000 teachers from 2,500 schools, perform a diverse range of music for every kind of taste at concert venues from Manchester, Birmingham, Sheffield and Dublin to London's O2 Arena.

According to Britannia Row's managing director Bryan Grant, the set up comprised a total of 48 Flashline TFS-900H flown line array elements, configured in two main hangs each of 15 boxes plus three Flex Array downfills, and two side hangs of nine TFS-900H plus three Flex Array downfills. Sub-bass was provided in the shape of 12 Flashline TFS-900L subwoofers ground stacked at the front of the stage, and eight powered TQ-440SP three-ways were deployed as front fills.

The Flashline TFS-900H's eleven neodymium drive units, uniquely configured across four discrete frequency bands, are capable of outputting up to 147.5dB peak SPL with negligible harmonic distortion, and due to the turnkey approach - trucking and flying four-up on a wheeled dolly, and packaged with industry-leading Lab.gruppen amplification - the system is intuitive and repeatable to deploy.

Front of house engineer for Young Voices, Colin Pink, commented: "These events are an interesting challenge in that there is not a lot of time to set up and rehearse the choir each day, and I'm pleased to say that Flashline is able to give us a very predictable result every time".