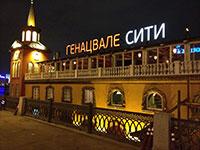 (PresseBox) ( Moscow, Russian Federation, 13-06-20 )
BEHRINGER continues to take their innovative EUROCOM install series directly to integrators and consultants through a global series of events including the vibrant capital of the Russian Federation, Moscow. Held in close proximity to the NAMM/Musikmesse Russia show the event attracted guests from across the vast country.

The seminar presentation was aimed at an intermediate to advanced audience and included an extensive introduction to both electronics and loudspeakers in the EUROCOM line. Applications for the MA6000 Series digital auto-mixers, AX Series networked controlled and DSP-enabled power amplifiers and the arrayable CL Series loudspeakers were particular hits with the engineering contingent. The educational portion of the event concluded with a EUROCOM application example designed for the Genatsvale City Restaurant & Bar that served as the host venue on the banks of the Moscow River.

Senior VP Marketing for MUSIC Group Costa Lakoumentas presented the technical portion of the agenda, commenting that "The level of interest from our Russian partners in EUROCOM is simply amazing. We are thrilled to hear that the solutions-based feature set of these products resonates with Russian integrators as much as it has in places like the U.S., UK and Indonesia." Lakoumentas is following the tour across Europe and on to multiple stops around Asia.

Deutschland hat eines der teuersten Gesundheitssysteme innerhalb der Europäischen Union. Das bedeutet aber nicht, dass es zugleich das Effizienteste ist. Könnten mithilfe des Internet of Things (IoT) die Kosten gesenkt und die Effizienz gesteigert werden? read more
The publisher indicated in each case is solely responsible for the press releases above, the event or job offer displayed, and the image and sound material used (see company info when clicking on image/message title or company info right column). As a rule, the publisher is also the author of the press releases and the attached image, sound and information material.
The use of information published here for personal information and editorial processing is generally free of charge. Please clarify any copyright issues with the stated publisher before further use. In the event of publication, please send a specimen copy to service@pressebox.de.