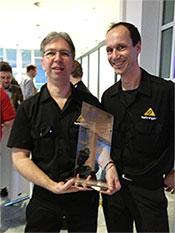 Since debuting in the summer of 2012, BEHRINGER's X32 has received accolades from both the media and audio industry professionals for sound quality, ease of use and versatility. Close to 30,000 consoles have already been sold, making the X32 the fastest selling digital consoles in the world.

"It is truly an honor to receive this award, especially against such formidable competition," remarked Uli Behringer, CEO for BEHRINGER's parent company, MUSIC Group. "The fact we were selected over such well-respected and much higher-priced brands inspires us to keep innovating and pushing the envelope. We are indeed proud of the X32."

About the X32 Digital Mixer

The X32 is aimed at both live sound and recording applications. The mixer combines extensive on-board processing and an intuitive control surface brimming with high-end features including motorized faders, individual channel LCD scribble strips and digital audio networking. The MIDAS-designed, digitally-controlled and recallable mic preamps, along with a standard USB2.0/Firewire interface, transform the X32 into a studio grade audio interface that has been praised for its sonic quality. Ultra-low latency AES50 network ports connect BEHRINGER’s S16 Digital Stage Boxes for remote input applications without need for an analog snake. The X32 delivers unprecedented performance and a superior feature set in an impressively powerful, cost-effective package. Like all BEHRINGER products, the X32 is also supported by a 3-Year Warranty program.

Aktuell prüft die Agentur für Arbeit, ob Betriebe Kurzarbeitergeld zurückzahlen müssen oder ob sie es zu Recht bekommen haben. Worauf es in der Praxis ankommt, erklärt Ecovis-Rechtsanwalt Thorsten Walther. Zudem gibt er Tipps für eine erfolgreiche Prüfung. read more
The publisher indicated in each case is solely responsible for the press releases above, the event or job offer displayed, and the image and sound material used (see company info when clicking on image/message title or company info right column). As a rule, the publisher is also the author of the press releases and the attached image, sound and information material.
The use of information published here for personal information and editorial processing is generally free of charge. Please clarify any copyright issues with the stated publisher before further use. In the event of publication, please send a specimen copy to service@pressebox.de.