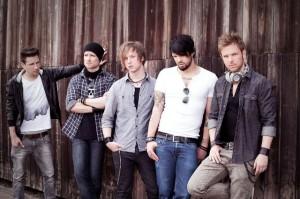 (PresseBox) ( Seattle, 13-06-21 )
BEHRINGER's X32 digital mixers will take the stage with F.R.E.I. when they hit the festival circuit in support of their new album, "Grenzenlos" [Limitless]. Founded by 5 musicians with a bevy of credits from years of touring, F.R.E.I. could have chosen any console for their maiden voyage - and they chose BEHRINGER. For monitor duties, F.R.E.I. selected the X32 Rack plus the S16 Digital Snake for stage to front of house connectivity. By creating a dedicated X32 eco-system with total mix recall, the band is ensured of consistent monitor and mains performance wherever they go, as well as fast set up and sound checks. The five-month tour will showcase the band at 18 of Germany and Austria's largest music festivals, including Munich's Tollwood Summer Festival and the Berlin IFA Summer Garden with touring partners, UNHEILIG and PUR.

Daniel Wagner, lead vocalist for F.R.E.I. stated, "Kudos to BEHRINGER for putting lightning in a bottle! The X32 Series offers top-notch, yet affordable tools for the touring musician."

About the X32 Digital Mixer

The X32 is aimed at both live sound and recording applications. The mixer combines extensive on-board processing and an intuitive control surface brimming with high-end features including motorized faders, individual channel LCD scribble strips and digital audio networking. The MIDAS-designed, digitally-controlled and recallable mic preamps, along with a standard USB2.0/Firewire interface, transform the X32 into a studio grade audio interface that has been praised for its sonic quality. Ultra-low latency AES50 network ports connect BEHRINGER's S16 Digital Stage Boxes for remote input applications without need for an analog snake. The X32 delivers unprecedented performance and a superior feature set in an impressively powerful, cost-effective package. Like all BEHRINGER products, the X32 is also supported by a 3-Year Warranty program.

Jährlich gibt ein KMU knapp 145.000 Euro für Industrie 4.0 aus. Dabei kommt es auf die richtige Finanzierungsform an. Wann Sie ein Leasing und wann Sie eine Kreditfinanzierung in Betracht ziehen sollten. read more
The publisher indicated in each case is solely responsible for the press releases above, the event or job offer displayed, and the image and sound material used (see company info when clicking on image/message title or company info right column). As a rule, the publisher is also the author of the press releases and the attached image, sound and information material.
The use of information published here for personal information and editorial processing is generally free of charge. Please clarify any copyright issues with the stated publisher before further use. In the event of publication, please send a specimen copy to service@pressebox.de.