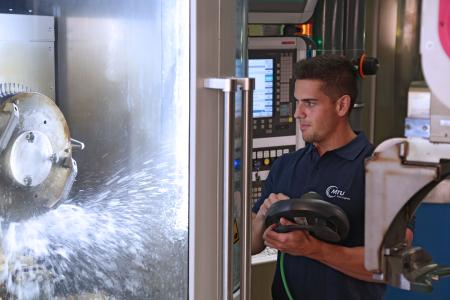 (PresseBox) ( Munich, 16-09-29 )
With the PurePower® Geared Turbofan™ engine (GTF), MTU Aero Engines is collaborating with Pratt & Whitney on assembling the aircraft engine of the future. The Pratt & Whitney GTF engine family reduces fuel burn and CO2 emissions by 16 percent and cuts noise footprint levels by 75 percent. MTU not only contributes innovative turbine and compressor technology to the GTF, it also brings some fresh ideas to the table on the production technology front: The company has refined a production method – dubbed precise electro-chemical machining (PECM) – for manufacturing high-pressure compressor (HPC) integrally bladed rotors (IBRs) made of nickel. Production is already underway on MTU’s shop floors in Munich on four custom PECM machines designed, set up and commissioned by MTU’s PECM experts.

Ulrich Peters, Senior Vice President Production at MTU in Munich: “On the PECM machines, we produce integrally bladed nickel rotors for stages five and six of the high-pressure compressor that goes into the PW1100G-JM engine, which powers the A320neo.” These components have a diameter of roughly 450 millimeters and feature extremely complex airfoil geometries. The HPC for this GTF engine is the first commercial all-IBR compressor.

IBR is a high-tech rotor design in which the disk and blades are produced as a single piece. This configuration reduces overall length and weight. IBRs are used in low-pressure compressors and high-pressure compressors for military and commercial applications. MTU manufactures such components for all PW1000G-family geared turbofan engine types, for the PW6000 engine powering the A318, and for the EJ200 (Eurofighter) and TP400-D6 (A400M) military propulsion systems. The German engine manufacturer has been one of the leading manufacturers of IBRs for years now.

These high-tech components are produced using a variety of methods, including linear friction welding to join the airfoil and hub; medium-sized and small IBR airfoils in titanium are milled from the solid. Producing the airfoil geometry on IBRs made from nickel falls into an entirely different category, nickel being a material difficult to machine. For the production of nickel IBRs therefore, MTU’s experts have further enhanced the electrochemical machining (ECM) process. Says Peters: “ECM is a standard technique that has long been part of our portfolio of manufacturing capabilities. PECM allows us to achieve even appreciably higher accuracies.” One advantage is that, as is generally the case with electrochemical material removal processes, there is no need for finishing the machined surface. “We’ve developed and built the PECM machines in-house, since the requirements for the new process are very exacting, to a point where it’s difficult finding a machine manufacturer capable of meeting them,” adds Herbert Neumeier, Senior Vice President Maintenance, Assembly and Production Service.

Here is how PECM basically works: Material is removed electrolytically from a metallic workpiece in a controlled manner under the action of electric current. In the process, the material to be machined is the positive pole and the three-dimensional metallic forming tool is the negative pole. The electrolyte used is an aqueous sodium nitrate solution, which flows between the anode and the cathode. The liquid has three main functions: It carries the electric current between the tool and workpiece, it removes the dissolved material and the hydrogen formed in the process from the machining area, and it dissipates the heat produced. The advantages it affords over conventional machining: The tools do not actually touch the workpiece, so they do not suffer wear in the process. Moreover, PECM allows an unprecedented level of precision to be achieved, not least thanks to the extremely narrow machining gaps of just a few micrometers.

These advantages could be used for other components or production steps as well. “In principle, the method lends itself to many applications, as, for instance, the rounding of edges or processing of individual blades or vanes,” explains Richard Maier, Senior Vice President Production Development and Support at MTU in Munich, “but for now, we’re just going to focus on IBRs.” And not without a reason: With high-pressure compressors, the airfoil geometries will become so intricate that before long, producing them by milling will cease to be economically viable. Says Maier: “With PECM, we’ll have a good alternative here.”

There is consensus among MTU’s experts that IBR constructions will play an ever increasing role – primarily in the HPC, but also in other compressor or turbine sections of the engine. “We're currently also looking into options to use IBRs in turbines,” explains Maier. The big advantage: On these integral components, the pitch angle of the airfoils can be adjusted to improve the efficiency of the individual rotor stages. In the HPC, this permits higher air compression ratios and hence higher pressures to be achieved in each stage. As a result, fewer stages are required to generate the same compressor power output. This makes the engines shorter and lighter in weight. They burn less fuel and hence cut carbon dioxide emissions, which is good for the environment. On top of that, they require less maintenance.

MTU Aero Engines AG is Germany's leading engine manufacturer. The company is a technological leader in low-pressure turbines, high-pressure compressors, turbine center frames as well as manufacturing processes and repair techniques. In the commercial OEM business, the company plays a key role in the development, manufacturing and marketing of high-tech components together with international partners. In the commercial maintenance sector the company ranks among the top 5 service providers for commercial aircraft engines and industrial gas turbines. The activities are combined under the roof of MTU Maintenance. In the military arena, MTU Aero Engines is Germany's industrial lead company for practically all engines operated by the country's military. MTU operates a network of locations around the globe; Munich is home to its corporate headquarters. In fiscal 2015, the company had a workforce of some 9,000 employees and posted consolidated sales of approximately 4.4 billion euros.