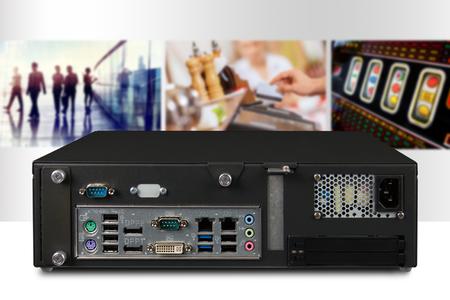 (PresseBox) ( Stutensee, 15-01-07 )
MSC Technologies, a business group of Avnet Electronics Marketing EMEA, a business region of Avnet Inc. (NYSE: AVT), presents the 330 x 206 x 88 mm embedded system Booksize B1-Q87 under the label DSM Computer. The compact computer is designed for applications sized between desktop computers and industrial computers, and is ideal for applications such as database servers. Other target markets are digital signage, retail and gaming.

The high-performance Booksize B1-Q87 integrates a MiniITX board with a fourth-generation Intel® Core™ i5/i7 processor from the desktop series that is passive cooled and significantly less expensive than a comparable mobile CPU. Depending on the type, the Thermal Dissipation Power (TDP) of the processors lies between 35 W and 45 W. Thanks to the passive cooling of the CPU, the service life of the computer system is increased significantly. The high-performance Intel® HD Graphics (e.g. HD4600) graphic controller is integrated in the high-end processor. The Intel® Q87 Express is deployed as desktop chipset. The on-board DDR3 SDRAM memory can be expanded to 16 GB.

The two redundant fans installed in the Booksize PC ensure that the CPU continues to be cooled even after failure of one fan. The replaceable fan cartridge facilitates maintenance of the computer. The embedded system receives its power from an integrated AC power pack or alternatively via a Phoenix socket of the DC input.

A free PCI Express™ x16 slot for short cards allows the B1-Q87 to be expanded flexibly, e.g. with a graphic card. In addition, one 3.5 inch exchangeable plug-in unit and two removable SSDs/HDDs are present. As an alternative to the two removable SSDs/HDDs, the computer provides space for an internal SSD/HDD.

To install the robust computer housing, MSC Technologies can provide base-mounted rails or a wall mounting.

The DVI-I and two DisplayPort (DP) V1.2 graphic connections of the B1-Q87 permit the connection of three independent, high-resolution displays. In addition to the USB 3.0 and USB 2.0 interfaces, two GbE LAN interfaces, Serial ATA and HD Audio are present.

MSC Technologies, a business unit of Avnet Electronics Marketing EMEA, a business region of Avnet Inc. (NYSE: AVT) specialises in intelligent embedded and display solutions for a range of different industrial applications. MSC Technologies, based in Stutensee, Germany, represents well-known manufacturers of TFT, touch and passive displays and offers customer-specific display solutions based on in-house technologies. In the embedded sector, MSC Technologies has many years of development and production expertise that ranges from COM Express and Qseven modules through to complete systems. It also provides wireless, storage and lighting solutions. With its consulting competence and full-service offering, MSC Technologies secures a competitive advantage for its customers with premium-quality solutions and long-term availability. The solution provider's business focuses on Germany, Austria, Switzerland, Spain and Eastern Europe.

Um Rechenzentren fit fürs AI-Zeitalter und für die Zeit ohne Kohlendioxid-Emissionen zu machen, stellte der chinesische Infrastrukturlieferant Huawei eine ganze Reihe neuer Technologien vor. Sie reichen vom Datacenter-Bau bis zur Datenvernetzung.. read more
The publisher indicated in each case is solely responsible for the press releases above, the event or job offer displayed, and the image and sound material used (see company info when clicking on image/message title or company info right column). As a rule, the publisher is also the author of the press releases and the attached image, sound and information material.
The use of information published here for personal information and editorial processing is generally free of charge. Please clarify any copyright issues with the stated publisher before further use. In the event of publication, please send a specimen copy to service@pressebox.de.