Embedded CEC function reduces current consumption by a factor of 1,000 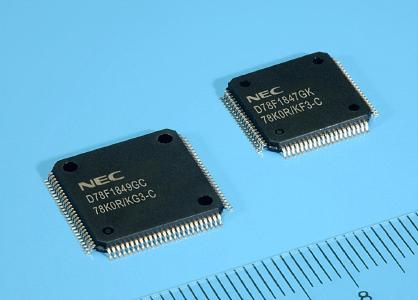 CEC enables via a High Definition Multimedia Interface (HDMI), the interdependent control of digital televisions, DVD recorders and other devices via a single cable connection. With help of the new 78K0R/KF3-C and 78K0R/KG3-C 16-bit microcontrollers, it is not only a matter of reducing the effort to develop control software. The first-time implementation of the CEC functions in hardware also leads to a radical reduction of current consumption, because the CPU of the microcontroller is no longer, as is up till now usual, burdened by the continuous monitoring of the system status. With a minimum current consumption of only 0.5 µA compared up till now to 0.5 mA, an improvement by a factor of 1,000 could be achieved here with the new devices.

Because the embedded CEC receiver and the remote control receiver are implemented in hardware, the signals from both units - CEC and remote control - can be simultaneously processed. This in turn significantly improves the system operability.

The microcontrollers, which are clocked at 20 MHz, are available with up to 128 Kbytes of Flash memory and 8 Kbytes RAM and feature - as with all 16-bit MCUs of the 78K0R/Kx3 series - a first class power/performance ratio of only 1.8 mW/MIPS. Furthermore, features such as the 3 stage pipeline enable the CISC architecture high processing speeds of up to 13 MIPS. At 20 MHz clock frequency, the minimum execution time is not more than 50 ns.

The same evaluation boards and on-chip debuggers, which NEC Electronics offers for all of its 16 bit microcontrollers, are available for the four new microcontrollers. Furthermore, a special additional CEC monitor software program, which will allow simulation of the CEC functions, is currently being developed.

The models 78K0R/KF3-C are available in an 80-pin LQFP and the models 78K0R/KG3-C in a 100 pin LQFP. Shipment of first samples is planned for the fourth quarter of 2008 and availability of production quantities for the middle of 2009.

Founded in 1979, Gleichmann & Co. Electronics GmbH, in the same company group with MSC Vertriebs GmbH, has established itself as one of the leading pan-European distributors of electronic assemblies and components. One of the reasons for the high acceptance by customers and suppliers is the company's early focus on comparatively few, highly sophisticated products such as microcontrollers, programmable logic devices, displays and customer specific power supplies. From this, the resulting in-depth technical know-how of our sales engineers and field application engineers today enables us, if required by the customer, even implementation of complete new designs right up to the finished product. With two of its own ASIC design centers, the Gleichmann research laboratory in Austria and one of the largest and most modern programming centers in Europe, Gleichmann Electronics takes a leading role in terms of service and customer support. More information can be found at: www.msc-ge.com