Energy efficient and flexible use 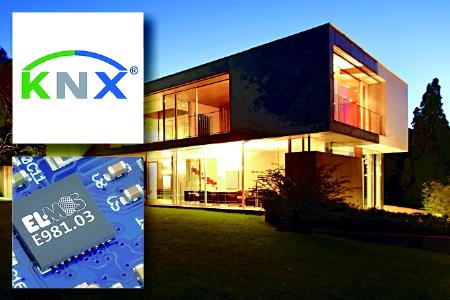 The device passed conformance testing according to KNX TP1-256 specification V2.0, volume 4 and EIBA AN 149, and is certified by the KNX Association. Data exchange with a transfer rate of up to 115 kbit/s is carried out via a UART interface which can be secured with optional cyclic redundancy check (CRC). Furthermore, an SPI-compatible interface is available to users for configuration and diagnosis.

The voltage supply of the KNX application comes from the KNX bus voltage. The transceiver internally provides two independent voltage regulators for this purpose. In addition, the E981.03 supports various energy-saving modes. For example, the host controller can be put into standby mode with low power consumption and woken up again later by a special KNX message via the bus with the help of the transceiver. Moreover, a configurable maximum KNX bus load (determined by a maximum bus current and a maximum slew rate) guarantees a KNX compliant behavior even when errors occur in the system.

The E981.03 KNX / EIB transceiver is provided in a QFN32L7 package with 0.65 mm pin pitch. Detailed information about the E981.03 can be obtained by sending an email request to elmos@msc-ge.com.

For many years, ELMOS Semiconductor is a leading developer and producer of customer-specific system solutions for the automotive sector as well as for consumer and industrial products. Based on the modular high-voltage CMOS technology, ELMOS offers a variety of analog, mixed-signal circuit elements such as voltage regulators, analog/digital converters, power drivers and non-volatile memory. In addition, special silicon-based microsystems based on MEMS sensor systems and dedicated package solutions, both developed and manufactured within the ELMOS Group, are offered. About 90 percent of sales are generated with ICs for automotive electronics. ELMOS is listed on the Prime Standard of the German Stock Exchange. More information can be found at: www.elmos.de

Founded in 1979, Gleichmann & Co. Electronics GmbH, in the same company group with MSC Vertriebs GmbH, has established itself as one of the leading pan-European distributors of electronic assemblies and components. One of the reasons for the high acceptance by customers and suppliers is the company's early focus on comparatively few, highly sophisticated products such as microcontrollers, programmable logic devices, displays and customer specific power supplies. From this, the resulting in-depth technical know-how of our sales engineers and field application engineers today enables us, if required by the customer, even implementation of complete new designs right up to the finished product. With two of its own ASIC design centers, the Gleichmann Electronics Research laboratory and one of the largest and most modern programming centers in Europe, Gleichmann & Co Electronics takes a leading role in terms of service and customer support. More information can be found at: www.msc-ge.com