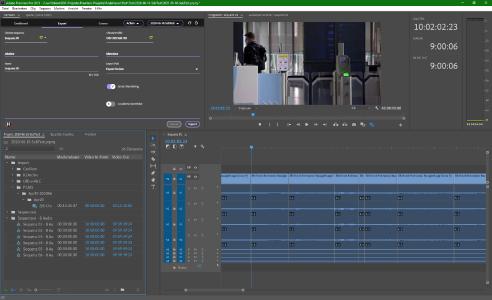 (PresseBox) ( Cologne, 20-07-17 )
Some media industry professionals call it ‘remote’ production; others refer to ‘decentralised’ or ‘autonomous’ production. The goal, however, is the same: to connect central media units with decentralised working structures. At the same time, highly automated processes should safeguard, accelerate and manage the steps in the production workflow, supporting creative teams in their work. Many market players have been working for quite some time to develop suitable plans and concepts – and the current situation is only intensifying these efforts. Across the globe, broadcasting organisations and media producers are reacting to the evolving requirements of changing working environments. The top priority: to make ‘editing@home’ just the same as ‘editing@work’. In this regard, Helmut4 project management software offers crucial management and coordination functionality for editing tasks, based on Adobe Premiere Pro, After Effects and Audition. ORF was one of the first companies to develop a pilot project concept for professional decentralised production. Now, following tests at a number of standardised workplaces, it has put this plan into action.

The ‘autonomous production’ pilot project was launched at ORF approximately one year ago. The goal is to create an infrastructure that allows editing teams to easily and directly edit reports from external locations – including from home offices. These teams require access to ORF's production infrastructure (MAM, graphics and control room server) and will work with Adobe Premiere Pro in order to ensure in-house compatibility. The editing software needs to feature a simplified user interface to enable straightforward editing, and Helmut4 project management software should handle all of the desired workflows in the background. While the professional editing suites at ORF's headquarters are technically separate from these new "editing workstations", they are built on the same foundations, making them easier to support.

Helmut4 organises editing projects in professional video production environments that use Adobe Premiere Pro, Adobe After Effects or Adobe Audition. The products in the Helmut4 ecosystem can manage projects, templates, preferences and profiles (FX), control project-related assets from ingest to export (IO), organise storage systems (Housekeeper) and seamlessly integrate them into any MAM/PAM infrastructure (Cosmo). Helmut4’s modular licensing model allows it to be adapted to fit each customer’s specific needs.

ORF deploys three of the four products in the Helmut4 group – FX, IO and Cosmo – for autonomous production within the pilot project, and also for its professional post-production tasks. The integral element that connects and controls all of the underlying processes is known as the ‘Streams Engine’. This is where all the necessary functions are defined in workflows and, if necessary, supplemented by additional customer-specific components. Users only see the interfaces that are relevant to them, meaning they can focus first and foremost on creating content.

The decentralised workstations offer the same editing capabilities as the editing stations at the broadcasting centre, but with a simplified user interface. Users have access to the central content management system in accordance with their assigned rights and functions, and are able to search for, edit and forward material in the same way as colleagues working in the newsroom or editorial offices. As a result, in the mid-term, the news, weather, social media, magazine and operational desk teams will be able to work in much the same way as they do now, regardless of their location. To help keep processes flowing smoothly, Helmut4 project management software runs in the background. Team members can focus on the editing steps that are directly relevant to their work, without having to worry about the technology, administrative requirements, handover processes or any other possible sources of error that could arise during the editing process.

The laptops being used remotely are connected to the ORF network via a secure VPN. Users work with proxies which are generated automatically and can be downloaded if needed at the touch of a button. Helmut4 handles the task of storing these proxies in the right place and automatically links them to the project. This allows users to create either rough cuts or complete reports.

The workflow is entirely automated. Material (high-res video) is imported from the MAM; Helmut asks the MAM for the path to the corresponding low-res video (also stored in the MAM) and downloads it automatically to the local computer and as a proxy in Premiere Pro.

Editing is performed in Premiere Pro as normal. Once the report is ready, high-res export can be triggered with a single click. If desired, the entire project can also be forwarded to an editing station at headquarters for further processing. The process is controlled via the render farm which has been implemented at the broadcasting centre. In this way, the databases are kept stable and consistent at all times – with the help of Helmut4. There is no need to copy files (apart from proxy files) in order to allow staff to work from home, nor is it necessary to laboriously track and transfer finished reports. And there are no gaps in the workflow. As a result, ‘editing@home’ really is just as easy and convenient as ‘editing@work’ – for ORF and other production environments alike.

MoovIT provides video and IT solutions for broadcasters and organisations of all shapes and sizes.

The company, headquartered in the Schanzenviertel district of Cologne, specialises in the development and support of workflows for all aspects of post-production, news and archiving at the interface between video and IT. MoovIT leverages particular expertise in the field of technical solutions for sports reporting. In addition, the company develops web-to-video solutions, localisations, remote editing systems and video hosting products used by organisations across a highly diverse range of industries.

In short, MoovIT is the perfect partner for worldwide support, managed services, software, hardware and integration solutions that accelerate and streamline processes - what we call WORKFLOW IN THE FLOW.

From the editing suite to social media channels