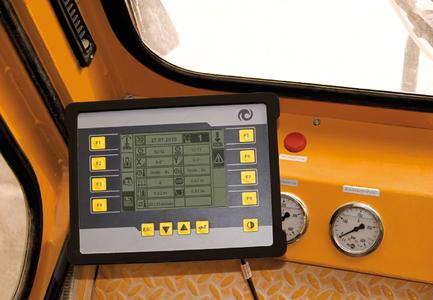 (PresseBox) ( Limburg, 11-06-10 )
Optimum accuracy when drilling blast holes is a decisive factor for smooth operation in quarries. This is also the case in the limestone quarry of Schaefer Kalk in the Rhineland-Palatinate village Hahnstätten. There, the MOBA MDS-2000 drilling system is used as a complete solution for controlling the drilling devices on a Hausherr HSB 2000.

"The MDS-2000 increases the efficiency of our work processes. With this system, we can drill about five percent more holes than before in the same amount of time. And this in turn saves time and money", says Antonio Polizzi, Quarry/Mining Foreman at Schaefer Kalk about the advantages of the MOBA technologies for his company. With the help of slope sensors and rotary sen-sors, the system records all drilling data such as drill hole depth, angle and drilling time. This information is displayed to the vehicle driver on a graphic display and saved there or sent directly to the office or to a mobile end device via telemetry. For about two years, Schaefer Kalk has been working with the Hausherr HSB 2000, equipped with the MDS-2000 system, in the Hahnstätten and Steeden quarries.

Reliable in use, easy to operate

Originally used as a test version parallel to the Jäger IS-22 drilling system, the company has since depended on MOBA technolo-gies: "The MDS-2000 has won us over with its robustness, its simple operation and its reliability in use", explains Antonio Polizzi about the system which was manufactured according to rough quarry conditions; all electronic parts are protected from dust, moisture and vibrations thanks to the completely sealed casing.

When drilling blast holes in limestone quarries, exact parallelism of the holes is essential for creating a smooth brim and preventing uncontrolled rock fall during blasting. The MDS-2000 controls the drilling device in such a way that the approximately 15 to 20 meter deep blast holes are drilled at the exact same angle. "And this aspect is very important to us to guarantee occupational safety", stresses Polizzi.

Flexible application in worldwide use

The MDS-2000 also plays out its advantages in small quarries: When space is limited and there is no way of turning the drilling machine, drill holes can still be applied in the desired positions, as the MDS-2000 can control the drill head exactly even if the machine is diagonal to the drill hole. When further developing the system which is now being used in quarries and special civil engi-neering applications worldwide, MOBA also incorporates sugges-tions from operators, for example displaying the average infeed during drilling. Due to its modular design based on CAN-open, the system is also open for other customer-specific requirements so that even future further developments can be easily integrated.