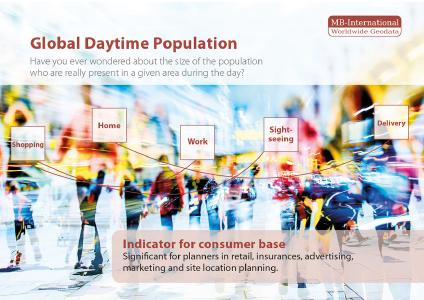 (PresseBox) ( Karlsruhe, 19-07-26 )
MB-International extends its global data offering by Global Daytime Population indicators. Now companies can get information about the size of population that is present in a given area during the day.

Mr. Roberts-York, Managing Director of Michael Bauer International says: “This new indicator for consumer base is significant for planners in retail, insurances, advertising, marketing and site location planning. It gives a better representation of where people are located during an average day.”

This is an important difference, especially for organizations that want to find out where people are during the day, rather than where they live. Despite official statistics, many parts of the world have populations that vary wildly from day to night. The daytime population in most areas increase substantially during the day, particularly those that have a workforce coming into the area for work and then commuting elsewhere at the end of the day.

Global Daytime Population indicators allow for monitoring population distribution changes during the week, during the season or any particular event.

MBI is a manufacturer and reseller of their own map, socio-demographics and boundary data that strives to provide businesses who want to make better informed investment with market data.

MBI is committed to supporting their customers to achieve an effective set-up and continuous handling of their geodata. Specialized in providing tailor-made data products according to each customer's individual requirements.