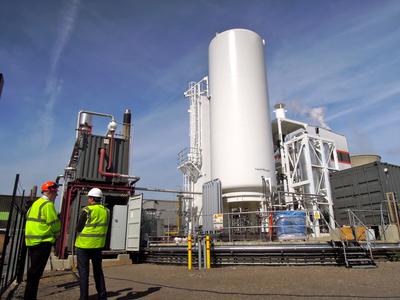 Said Highview CEO, Gareth Brett, “With our pilot plant built out and fully operational last year, signing our first commercial agreements was always the next key step. We now have specific feasibility studies and front end engineering work to undertake but I am confident that we shall see the ground being broken for the first multi-MW plants next year.”

Messer is the largest privately run industrial gases specialist and is active in over 30 countries in Europe and Asia, as well as Peru, with over 60 operating companies. It is headquartered in Germany and in 2011 the Messer Group’s 5,251 employees generated consolidated sales of € 1,029 billion. The name Messer has been associated with expertise in the design and operation of cryogenic air separation pants for more than 100 years. The company operates over 70 cryogenic air separation units in Europe, Asia and South America for the bulk production of cryogenic gases and for supplying large industrial consumers from the steel, chemical and petrochemical industries.

Highview has piloted the world’s first liquid air energy storage plant (LAES). Hosted by Scottish and Southern Energy (SSE) at Slough Heat & Power, LAES is one of only a few technologies which can be delivered today at the 50 to 100MW scale with hundreds of MWh of energy stored. Critically the technology relies on mature components, bu
t assembled in a novel process, which significantly reduces the technology risk.
The agreement between Highview and Messer Group is specifically for the development of LAES (liquid air energy storage) systems integrated with industrial gas plants. Messer Group’s EVP Production and Engineering, Mr Johann Ringhofer believes that in the industrial gases industry, which is highly energy intensive, the integration of Highview’s technology could provide a competitive edge. “We look forward to a successful development of the energy storage process,“ he explained.

The agreement leaves Highview free to develop any projects which are neither co-located nor otherwise connected with the commercial production of industrial gases in the agreed markets, but as Brett explains, “given the front end of our system is an industrial gas plant, having Messer on board is a great fit for other projects we are being asked to look at.”

Messer is the largest privately run industrial gases specialist and is active in over 30 countries in Europe and Asia, as well as Peru, with over 60 operating companies. Its international activities are managed from Frankfurt am Main, whilst management of core technical functions - logistics, engineering, production and application engineering - is undertaken from Krefeld. In 2011, 5,251 exmployees generated consolidated sales of € 1,029 billion.
From acetylene to xenon, the Messer Group has one of the most diverse product portfolios on the market - it produces industrial gases such as oxygen, nitrogen, argon, carbon dioxide, hydrogen, helium, shielding gaes for welding, specialty gases, medical gases and many different gas mixtures.

The Messer Group has state-of-the-art research and competence centers in which it develops applied technologies for the use of gases in almost every sector of industry, in food technology and environmental technology, medicine as well as research and science.