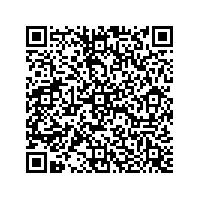 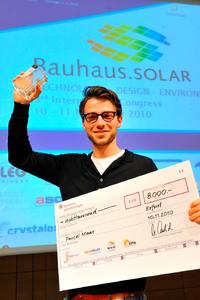 (PresseBox) ( Erfurt, 10-11-10 )
The "POWER.Plant" project by Pascal Maas from Münster (Germany) wins the Bauhaus.SOLAR AWARD 2010 sponsored for the first time by SolarInput, Solarvalley Mitteldeutschland, the German Solar Industry Association and European Photovoltaic Industry Association (EPIA). Two other projects from Oxford and Weimar were presented with awards at the 3rd international and scientific Baushaus.SOLAR congress evening event in Erfurt.

"The Bauhaus.SOLAR AWARD sends an important signal to Europe", emphasises Michael Frielinghaus, Chair of the jury and President of the Association of German Architects (BDA). "Renewable energies are the starting point for forward-looking ideas in design, architecture and urban development."

"The promotion of young talent in architecture and design is an important commitment for the award sponsors", says Dr. Hubert Aulich, Chair of SolarInput. "Young designers and architects develop buildings that generate more energy than they use thanks to the integration of renewable energies and receive a new form and function. With this they are making a crucial contribution to effective climate protection."

The winner of the award is the "POWER.Plant" project, submitted by Pascal Maas from the msa münster school of architecture. The design receives prize money of 8,000 EUR. It shows an exemplary interpretation of innovative technology on the facade and the use of microalgae cultures in the (solar) architecture. "It is a new architectural form of expression in which the algae produce oxygen in the facade, therefore absorbing carbon dioxide", according to Michael Frielinghaus. "At the same time, biodiesel is produced in this innovative way which then drives a cogeneration unit." This results in a circuit which leads to the building emitting minimum pollutants. Hubert Aulich adds: "This concept approach is a model example for the long-term deployment and use of solar energy by biological means."

As well as the Bauhaus.SOLAR Award, two other projects received awards, which were each endowed with 1.500 EUR: firstly Matt Townsend from Oxford Brookes University with his H2SOLAR project. He starts from the vision that in 2040 sea levels will have risen so much as a result of climate change that major cities like London are under threat. The threatening lack of drinking water caused by this is remedied by innovatively collecting and preparing rainwater using power produced by photovoltaics.

Secondly, the "Sun Place, a solar petrol station for India" project by Bianka Brandl from the Bauhaus University Weimar, which is an exciting interpretation in an urban planning context. She tackles gridlocks in an Indian megacity with an e-mobility district which not only supplies drive power for rickshaws but also meets driver's requirements. The other nine nominated projects receive a recognition reward from the sponsors of 500 EUR each.

The Bauhaus.SOLAR Award is endowed with € 15,000 in total and honours work from architecture and design which demonstrates the use of renewable energies in an outstanding way. It offers talented young designers and architects the chance to present their designs, projects and innovations to the public and companies. The invitation to enter was well received unexpectedly widely and internationally with over 90 submissions from 10 countries.

Students from all European design and architecture educational institutions as well as young designers and architects who graduated up to two years ago were invited to enter. The submitted works (drafts and realised projects) were not allowed to be more than two years old and had to have resulted whilst studying or at the most within two years of graduation.

The international jury made up of architects, designers and representatives from the solar industry and research includes the elected Chair, Michael Frielinghaus, President of the Association of German Architects and the following:

For interviews and more information: Please contact the Bauhaus.SOLAR congress press office (2nd floor of the CongressCenter at Messe Erfurt) as well as www.bauhaus-solar-award.de

SolarInput has been managing a network of solar companies, service providers, research and education institutions and authorities from Thuringia since 2003 and is committed to the cross-industry strategic networking and regional integration of the solar industry in Thuringia. SolarInput is part of the BMBF "Solarvalley MittelDeutschland" cluster of excellence, the internationally leading photovoltaic cluster, as well as organiser of the international and scientific Bauhaus.SOLAR series of congresses.