For more Reliability and Comfort in the Train: The Main Server MH70R 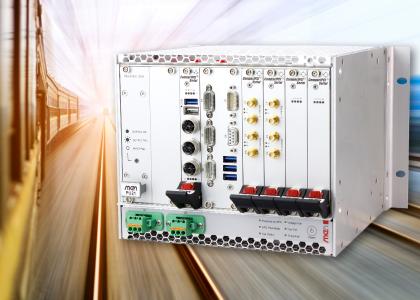 (PresseBox) ( Nuremberg, 17-01-12 )
.
The MH70R from MEN can be used as a stand-alone computer system, or in a networked configuration of two or more sub-units as a mobile IT infrastructure platform, and acts as the central component of the menRDC railway data center. The menRDC is the mobile office IT computer for virtually all non-vital train applications.

The menRDC Concept: Transparency for the application and independence from a specific manufacturer thanks to standard technologies

In order to meet the growing number of automated functions in the train, MEN has now expanded its range of rail services with an additional family: the menRDC (Railway Data Center) for non-vital applications is the perfect complement to menTCS in the safety-critical area.

menRDC relies on industry standards for hardware, software and communications and thus creates a neutral computer platform with an infrastructure comparable to office IT, which is independent of the actual application. For many applications the MH70R alone functions as a central server and virtualization computer.

The heart of the MH70R is a powerful CPU card with Intel-Xeon-D processor – especially suitable for virtualization – with up to 16 processors, 10 Gigabit and Gigabit Ethernet interfaces, as well as conventional serial I/O like RS232 and USB 3.0. The most common wireless communication functions and some RAID memories are implemented in the system using modular CompactPCI Serial peripheral cards.

A Linux-based hypervisor is used on the MH70R to abstract the hardware from the application. On the hardware side, virtualization is supported by the Intel VT-x and VT-D technology. The Trusted Platform Module (TPM), which encrypts data through cryptography, error correction code (ECC) support, board and system management control, as well as a watchdog timer, ensure reliability and security.

To ensure reliability and redundancy, the MH70R provides two PSU slots (AC or DC) that can be powered by independent power supply networks. Thus normal operation is ensured if at least one external voltage is present.

Depending on the requirements, the main computer MH70R itself can be combined with additional modules for memory expansion, communication with other train calculators or I / O interfaces. For even more extensive train IT applications, additional standard systems of the menRDC family come into play: the MH70S data storage system and the NH30 managed Gigabit Ethernet switch, which reliably distributes the collected information to the right place.

The MH70R is a reliable and robust built-to-order system with low space requirements, which can also be configured fanless for long-term use under harsh and extreme conditions.

duagon AG proves to be reliable supplier of medical hardware

Seit Herbst 2019 werkelt eine OCP-Arbeitsgruppe an einem modularen Chipdesign. Es könnte dabei helfen, den oligopolistisch strukturierten Chipmarkt für Neulinge und innovative Konzepte zu öffnen. read more
The publisher indicated in each case is solely responsible for the press releases above, the event or job offer displayed, and the image and sound material used (see company info when clicking on image/message title or company info right column). As a rule, the publisher is also the author of the press releases and the attached image, sound and information material.
The use of information published here for personal information and editorial processing is generally free of charge. Please clarify any copyright issues with the stated publisher before further use. In the event of publication, please send a specimen copy to service@pressebox.de.

Recommend For more Reliability and Comfort in the Train: The Main Server MH70R press release