Implementation of MembrainSFC and a touchscreen solution 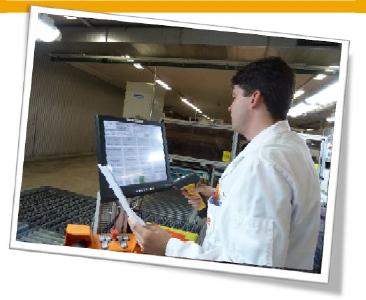 (PresseBox) ( Unterhaching, 16-06-17 )
Isola GmbH was founded in Düren in 1912 and currently employs around 350 people. The company is an affiliated company of Isola USA Corp. that is based in Chandler/Arizona and has two other locations in Elk Grove/California and Ridgeway/South Carolina. Today, Isola GmbH is one of the leading manufacturers of the coppercoated glass-fibre reinforced base materials (electronic laminates) needed to produce printed circuit boards. Projects for optimising the production processes are managed in Düren. Manufacturing the glass-fibre reinforced base materials requires five processes - impregnation, moulding, pressing, releasing and final processing.

The aim of the project was first to optimise the parts of the production processes involved in the final processing of the laminates. This would involve integrating the data acquisition, which took place in what was known as the "Abschreiberbüro" or "write-off office", into the production process. It was also hoped that this would lead to improved data quality. This optimisation project was divided into subprojects.

Following successful implementation in Düren, the subprojects were implemented at the three locations in the USA depending on the individual situation.

Since 2003, all of the data input and the documents created from these data for the final processing stage of the production process had taken place in a "writeoff office" specifically for this purpose. The necessary transactions were performed, from creating the production order to generating the shipping documents in SAP (GUI). Failure recording involved the production employees creating a handwritten list of errors that were entered into the system in the write-off office. This was very time consuming and led to transmission errors, which in turn gave an unsatisfactory level of data quality. The write-off office procedures were laborious, time consuming and generated additional costs.

The standard SAP transactions were too complex for the production employees. Isola GmbH therefore started looking for a leaner, optimised solution. An initial idea involved using a mechanical switchboard for directly recording production failures. Later, this transformed into using touchscreen monitors as the basis for the new solution.

The main requirement placed on the new system was to be able to use as many established functions as possible. There also had to be an interface to SAP and it had to be easy to integrate into the existing IT environment. Particularly important were the incorporation of all existing Visual Basic applications, and the connection of the existing Lotus Notes system that contained important supplier information.

The system had to be scalable in order to quickly cover any new future requirements. Furthermore, all remote data collection in SAP had to perform better and be more reliable, the transactions carried out by the production personnel kept as straightforward as possible, and the user interfaces of the touchscreen monitors as user-friendly and practical as possible. Finally, the solution had to be affordable and have all the functions as standard.

The deciding factor in favour of MembrainSFC and the touchscreen solution was seeing it in action at a Membrain GmbH reference customer. Membrain GmbH is a leading provider of fully integrated production and logistics solutions. The product portfolio ranges from package software to complex systems for mobile data acquisition, machine and production data acquisition, and manufacturing execution Systems (MES). In 2007, the Membrain software was awarded the Innovationspreis Mittelstand for innovative SMEs and in 2008 it achieved the Industriepreis for outstanding industrial solutions.

First, MembrainSFC (shop-floor communication) was integrated into the existing IT environment, whereby an RTC server (Real Time Communicator) manages the processes. All relevant modules (production orders, remote data collection, documentation generation or system information) can be connected and communicate with one another in real time. This made it possible to connect the existing SAP system and all existing functions, and transfer of the Visual Basic applications.

Mr Freier, who works in the IT department at Isola GmbH in Düren, reports that, "the production employees accepted the new system right from the start and are very happy with the clear, user-friendly user interfaces of the touchscreen monitors."

Subproject 1, the failure recording, involved generating the relevant SAP modules and programming them in the C# programming language. The clients, in the form of touchscreen monitors, were connected to the production equipment. These monitors had an intuitive, user-friendly user interface. A short briefing was all that was required for the production personnel to be able to operate the system. Data quality improved thanks to the automated process control. Then Subproject 2 was implemented in Düren. The existing Lotus Notes database was integrated into the new SFC solution. The production employees could now launch the database direct from their touchscreen monitor, record the necessary information and generate the documents. Subproject 3 involved the production employees generating delivery notes and quality inspection certificates. This was done by creating a function module in SAP that the production employees use to edit the processes. They check whether the quality and quantity match the delivery note orders to be carried out. If everything corresponds, they are authorised by the production employees and the documents are generated automatically. If there is a discrepancy, this is confirmed by the process coordinator before the order is closed and the dispatch also confirmed via MembrainSFC.

Implementing MembrainSFC and the touchscreen monitors has optimised the procedures and integrated data acquisition into the production process. This has significantly improved data quality and created free capacity that was previously consumed with complex data entry in the write-off office and handwritten failure lists.