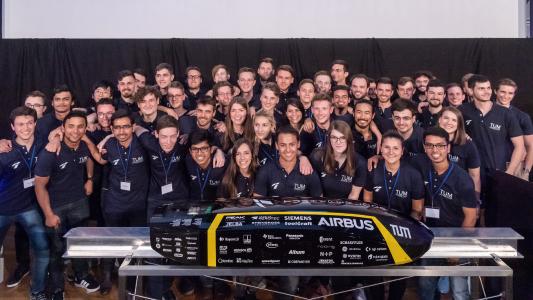 (PresseBox) ( Georgensgmünd, 19-07-03 )
In 2013, Elon Musk, the founder of SpaceX, PayPal and Tesla, introduced the Hyperloop – an innovative transportation concept consisting of a high-speed train "fired" through a tube. At present, our future mobility needs and environmental protection requirements are no longer being met. The aim of the new transport system is to link major cities. For example, the journey time between Munich and Berlin could be reduced from its current length of four hours to around 35 minutes. The competition between university teams from around the world to develop the fastest pod is already entering its fourth round. The TUM Hyperloop team, which comprises students from the Technical University of Munich (TUM), is taking part again this year and is hoping to build on its previous successes. Like before, the competition is being judged on speed.

In August 2018, the pod designed by the Technical University of Munich notched up a top speed of 467 km/h, which is one of the fastest recorded in the world and the highest to ever be achieved by a Hyperloop. This year, the students are trying to reach half the speed of sound. At this speed, the pod needs to be able to come to a complete stop in just under two seconds to avoid it breaking through the end of the tube. The braking distance is just shy of 200 metres. To meet this objective, the students have redesigned their Hyperloop. toolcraft is sponsoring the project again by providing parts for the brakes. The most important change this year is the "normally closed design", which is making the system much more fail-safe. The braking system is made up of eight double-acting cylinders. One chamber serves as a pneumatic spring, while the others release and open the brake. The total braking power amounts to 8,250 N. To save on weight, the geometry is considerably more complex than in the previous year, meaning that the brake components are also more complicated to produce. Each brake cylinder takes between eight and ten hours to manufacture. All the parts – from the brake bodies and brake cylinders to the covers and supports – are made from titanium.

The perfect choice for constructing the Hyperloop 4.0

TUM Hyperloop has established a research department to help it perform better in the competition and to further develop the idea of the Hyperloop transport system. The team has set itself the target of building a small-scale model of a working Hyperloop system to allow valuable insights to be gained in advance. In July, the actual pod will travel through the approximately one-mile-long Hyperloop system built by SpaceX at its headquarters in Hawthorne, California. One of the most significant new criteria of this year's competition is that the teams must use their own communication system to communicate with their pod during the race. TUM's new pod was rolled out on 19 June and the competition itself will take place in Los Angeles on 21 July.

toolcraft is a pioneer of forward-looking technologies, such as 3D metal printing and the construction of customised turnkey robotics solutions. The company tests and develops innovative engineering processes until they are ready to be used on production lines. As a provider of comprehensive solutions, toolcraft covers the entire process chain, from the initial idea to manufacturing, quality assurance and testing in the areas of CNC machining, 3D metal printing, injection moulding, spark erosion (EDM) and mould making. Its clients include market leaders in the semiconductors, aerospace, medical technology, optical, special machinery manufacturing, motor sports and automotive industries. Building close working relationships with collaborative partners as well as universities, other institutions of higher education and research centres is an important part of its corporate philosophy. The medium-sized family-owned company, located in Georgensgmünd and Spalt, was founded by Bernd Krebs in 1989.