A new age of injection moulding and mould making is dawning 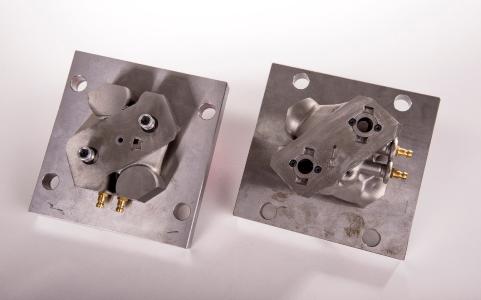 (PresseBox) ( Georgensgmünd, 19-08-13 )
toolcraft unites seven divisions under one roof. An in-house project conducted with its partner Siemens demonstrates how these lines of business work together in a mutually beneficial way. The starting point was a mould for manufacturing a plastic component for the optical industry. The opportunities created by 3D metal printing allow new avenues to be explored and moulds to be completely re-imagined. The result was a mould with an optimised topology, which is not only easier to manufacture, but also significantly improves the process of producing the plastic component.

The tool used to date comprises mould inserts, mould plates, mounting plates and standardised components. It measures around 125 x 125 x 130 mm (width x length x height) and weighs approximately 60 kilograms. The objective of the project was to improve the injection moulding process in terms of its cycle time, to make the unit less complex and to simplify the development process. Here, toolcraft benefits from its long-standing expertise in additive manufacturing. The considerable flexibility offered by 3D metal printing meant that the design engineer could completely reconfigure the insert and improve its topology in line with the specific loads and requirements. The result was a brand new mould – smaller, lighter and with integrated conformal cooling.

“Certain surfaces had to be retained during the topology optimisation process in order to preserve the functionality of the mould”, says Ralf Domider, design and simulation metal laser melting at toolcraft. “Special requirements, such as the need for both parts to fit together precisely, the position of the ejector and the connectors for the machine's peripherals, had to be taken into account when optimising the topology.” Options for later clamping the mould for reworking in a CNC machining centre also had to be considered during the design stage. In order to make full use of the technological advantages of additive manufacturing, functional surfaces, such as a conformal cooling channel with an optimised cross-sectional area, were integrated into the blank. A further challenge was the warping of components during the 3D metal printing process. Arranging the components in the best way possible and creating the necessary supports require an in-depth understanding of the process as well as experience in preparing data for additive manufacturing. This also has a strong influence on component warping. With the support of integrated process simulation, this warping can be calculated quickly and efficiently. This allows unwanted rejected components or disruptions in the construction process to be avoided from the outset. The "first time right" principle is an important indicator for the technological maturity of additive manufacturing and is especially crucial for industrial applications.

After redesigning the mould, the designer extracts functional surfaces and specifies the framework conditions. The material is also selected at this point. This is followed by the integration of conformal cooling, topology optimisation and verification using FEM calculation and cooling simulation. The data is then prepared for printing. The simulation of the printing process is followed by production and finishing, from heat treatment, removal of supporting structure, surface treatment to machining reworking as well as optical and tactile quality control.

A first step towards the future of mould making

The new and improved 3D-printed mould has much smaller dimensions. “The original unit comprising several individual components has been reduced to a mould half. The optimised tool therefore weighs almost 50% less than its predecessor”, Domider sums up. The low weight means that less mechanical power is required and makes the mould easier to assemble into the injection moulding machine. At the same time, the tool is much higher performing despite the shorter development period. The lower mass and the conformal cooling reduces the cycle time by 30%, while ensuring that the component quality remains the same.

toolcraft is a pioneer of forward-looking technologies, such as 3D metal printing and the construction of customised turnkey robotics solutions. The company tests and develops innovative engineering processes until they are ready to be used on production lines. As a provider of comprehensive solutions, toolcraft covers the entire process chain, from the initial idea to manufacturing, quality assurance and testing in the areas of CNC machining, 3D metal printing, injection moulding, spark erosion (EDM) and mould making. Its clients include market leaders in the semiconductors, aerospace, medical technology, optical, special machinery manufacturing, motor sports and automotive industries. Building close working relationships with collaborative partners as well as universities, other institutions of higher education and research centres is an important part of its corporate philosophy. The medium-sized family-owned company, located in Georgensgmünd and Spalt, was founded by Bernd Krebs in 1989.