The black-blue devil returns strengthened back! 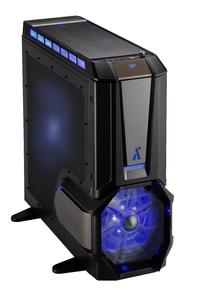 (PresseBox) ( Ahrensburg, 08-10-20 )
The long wait is coming to an end - under its own brand of A+ the company MaxPoint presents the devilish beautiful follow-up model of the very successful "EL Diablo" PC case, which is much sought-after in gamer circles. The new "EL Diablo Advance" outwardly confidents, like its predecessor, by Titanium inlays in a black chassis, accentuated by separately controllable and backlit with blue LED fans. Therewith a great atmosphere can be staged in darkened rooms. The top cover of the super tower is completely redesigned: borne by blue lateral LED strips it includes two additional fans, gleaming also in cool blue. In the front bevelled edge a temperature indication with blue acrylic display is integrated; directly behind it are additional ports and controls.

Following the new hardware trend the ventilation system and the hard drive bays have been further optimised to achieve an even more efficient cooling. Besides the gigantic 330 mm fan in side panel, hiding behind a mesh window, and a 250 mm fan embedded in front, two 180 mm fans on top provide a still better air circulation. Especially the upper part of the case, where the heat usually collects, will be better ventilated. Thus, the upper 5.25" bays, the power supply and the CPU area are cooled more intensive. So that the cooling system of the "EL Diablo Advance" has gone a step closer to the ideal of a water cooling, without need to accept their many disadvantages (expensive components, difficult installation, maintenance and care, fiddling with the chemistry and potential water damage). Through the built-in fan control all fan areas can be adjusted separately and customised to the individual needs and temperatures.

Additionally two USB 2.0 ports, two audio ports and one eSATA port are integrated in top cover for faster and easier access to the different interfaces. The case also has special, screwless installable hard disk trays, which protect the disks effectively and minimise noise and vibrations. The case offers space for up to 12 hard drives and 7 PCI cards, which are very easy to install, and can accommodate Standard ATX, Micro ATX and MP dual record motherboards.

The "EL Diablo Advance" PC case will be available from end of October in specialised shops for a recommended retail price of 145, - Euro.

MaxPoint is an international operating manufacturer and importer of IT-peripherals. The MaxPoint group consists of several divisions concentrating independently from each other on their particular clientele, but offering a well-adapted overall portfolio. The most important brands are Tagan, Seasonic, SilverPower, RackMax, KeySonic and Aplus.