Chucks from MAPAL shine with a new brilliance 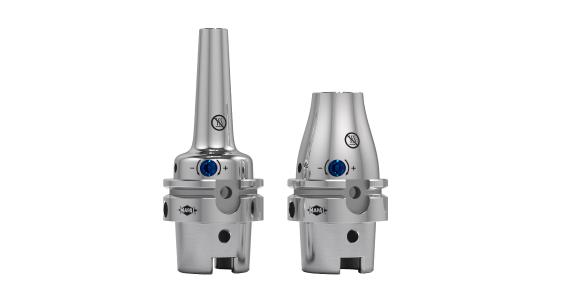 (PresseBox) ( Aalen, 19-08-30 )
Since 1993, MAPAL has built up a broad portfolio in the area of clamping technology: from the clamping cartridge to the application-specific hydraulic chuck. The company is now announcing an entirely new appearance for these items. In this way not only will the complete range have a uniform appearance, additional potential with corresponding added value for the customer has also been tapped by means of intelligent design.

Up to now, industrial and product design have played a rather less significant role during the development of chucks at MAPAL. The focus was primarily on reliable function. As a result the developers have gradually built up a broad portfolio that, however, did not have a uniform appearance. To change this situation, MAPAL involved the experts from an award-winning design agency in Schwaebisch Gmuend, Germany.

Not only the appearance of the chucks was to be revised, above all added value for the customer was to be generated by means of carefully considered industrial design. Why? An ingenious design is not only a visual highlight, it also taps economic and ecological potential. Starting from this point, the product designers prepared, together with those responsible for the products at MAPAL, a new concept that is also based on function and FEM analyses.

The chucks designed according to this concept shine proverbially with a new brilliance. One of the elements in the new concept is the brilliant surface finish. This surface finish, produced by a specially developed polishing method, ensures that the chucks are more resistant to corrosion than in the past.

A further requirement on the new design was so-called „foolproof-handling“; that is the easy, self-explanatory handling of the chucks. Operating elements were to be quickly identified and handling information self-explanatory. These requirements were addressed, on the one hand, by the blue colour of these elements, such as the actuating screw on a hydraulic chuck and, on the other hand, by internally developed symbols that contain corresponding information, independent of the related language.

Last but not least the shape of the chucks, their weight and use of material were studied and optimised. The new shape addresses the requirements for the greatest possible stability with optimal usage of resources. Even the smallest weight savings on chucks have major effects that become apparent in use over the long term. Among other aspects, the lighter the chuck, the less energy is required during the acceleration and braking of the spindle.

Due to the new corporate design, the complete clamping technology range can be immediately identified as stemming from MAPAL – everything clearly comes from the same place. This is all the more important for the company because historically MAPAL is not often perceived as a manufacturer of chucks. MAPAL will present the concept for the first time at EMO 2019 in Hanover.

MAPAL Präzisionswerkzeuge Dr. Kress KG is one of the leading international suppliers of precision tools for the machining of practically all materials. The company founded in 1950 supplies leading customers from the automotive and aerospace industries and from machine and plant engineering. With its innovations the family-owned company sets trends and standards in production and machining technology. MAPAL sees itself as a technology partner, supporting its customers with the development of efficient and resource-conserving machining processes using individual tool concepts. The company is represented with production facilities, sales subsidiaries and representatives in 44 countries worldwide. In 2018 the MAPAL Group had 5,500 employees, generating sales of EUR 640 million.