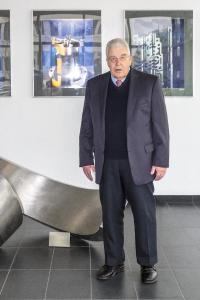 (PresseBox) ( Aalen, 17-05-17 )
Dr Dieter Kress, the President of MAPAL Dr. Kress KG, will celebrate his 75th birthday on 18 May. He joined the company 48 years ago. Over this period MAPAL developed from a small, regional manufacturer of screw taps to become an international group; today it is one of the leading manufacturers of precision tools for machining cubic parts. The company employs around 5,000 people worldwide and recorded a consolidated turnover of 570 million euros in 2016.

After completing his studies of mechanical engineering and business management, in 1969 Dr Dieter Kress joined the company founded by his father, Dr Georg Kress, in 1950. While working Dr Dieter Kress wrote his doctoral thesis on the subject of reaming. And the success of MAPAL is based on “reaming”. In 1954 Dr Georg Kress bought the patent for an adjustable reamer from an Italian inventor. Some optimisation was required, but afterwards the reamer achieved exceptional results. When Dr Dieter Kress joined the company in 1969, he developed high-performance special tools from the standard reamer product. “We always adjusted the tool to the specific situation of the customer” Kress recalls. And with that, the spirit of MAPAL started to emerge - always focusing on the customer to find the best solution for him.

In addition to the reamer, Dr Dieter Kress cites other aspects that contributed to MAPAL’s strong growth: “The demand for tools rose with the switch from transfer lines to machining centres. That is why we have steadily expanded our range of products since the 90s.” Today MAPAL is a full-range supplier for machining cubic parts, covering the areas of reaming, fine boring and boring, drilling and countersinking, clamping, milling and hard turning as well as actuating. In addition to devices for setting, measuring and dispensing tools, the company also offers numerous services related to tools.

Company start-ups and acquisitions around the globe formed a further aspect of the company’s growth. Today the company is present in 44 countries. But as Kress emphasises: “We grew more from within than through acquisitions. It never was the culture of MAPAL to buy large companies. Either we started the companies ourselves or bought smaller firms.” Dr Dieter Kress follows his own strategy when acquiring a company: “For me it was always important to respect the company’s particular culture. The founders of these companies, such as WWS in Pforzheim or MILLER in Altenstadt, always stayed on as managing directors in the company.” And so MAPAL was gradually able to expand.

“Of course you need a lot of luck for a company to grow like this,” Kress acknowledges. As well as the freedom to take your own decisions - also at short notice. For example, it was thanks to Dr Dieter Kress’ enthusiasm that MAPAL invested in a 3D printer in 2013. “We only had a very vague idea of whether 3D printing would be useful and practical for tooling when we bought the first device,” Kress admits. Today MAPAL manufactures tools on three printers - with significant added value for customers.

And the future of MAPAL as a family-owned business is also secure. Dr Jochen Kress has been at his father’s side in the company since 2008. And he is taking on more and more areas of responsibility as a member of the company’s executive board. “In contrast, I am withdrawing more and more from daily business. My son will take my place in the not too far distant future” Dr Dieter Kress announces. “I am happy to see how he approaches the issues of today, for example with the c-Com platform. But I am also content that I can still make a valuable contribution. That is the advantage of having your own company. I can continue to work as long as I want.”

In addition to his work at MAPAL, Dr Dieter Kress is also very active on behalf of the region; for example, for many years he was a member of the board of trustees at Aalen University. He was a founding member of the P.E.G.A.S.U.S. association, which supports young companies in the area. Kress has also worked in a honorary capacity in various committees and initiatives on a supra-regional basis. For many years he headed the professional association for precision tools within the German Mechanical Engineering Industry Association (VDMA). Furthermore, as the then chairman of the national and international standards commission, Kress was materially involved in the introduction of the HSK standard, which has proved to be extremely important for flexible manufacturing. Dr Dieter Kress was awarded the Cross of the Order of Merit of the Federal Republic of Germany for his services and commitment.

Dr Dieter Kress will celebrate his 75th birthday with a reception at MAPAL for his family and invited guests. “It is important to me that the staff can celebrate as well,” Kress explains. That is why a big family celebration day will be held in May at the Aalen plant.

MAPAL Präzisionswerkzeuge Dr. Kress KG is one of the leading international suppliers of precision tools for the machining of practically all materials. The company founded in 1950 supplies leading customers from the automotive and aerospace industries and from machine and plant engineering. With its innovations the family-owned company sets trends and standards in production and machining technology. MAPAL sees itself as a technology partner, supporting its customers with the development of efficient and resource-conserving machining processes using individual tool concepts. The company is represented with production facilities, sales subsidiaries and representatives in 44 countries worldwide. In 2015 the MAPAL Group had 4,800 employees, generating sales of EUR 540 million.