Langley appoints his own man to head manroland sheetfed 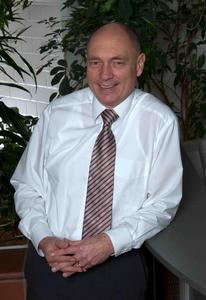 Mr Rothlaender (66) was formerly head of machinery builder Claudius Peters near Hamburg when Langley acquired the business in 2001. Mr Rothlaender then went on to head the Piller Group, a producer of heavy electrical systems for data centres near Hanover, between 2005 and 2008, following Langley's acquisition of that business, before retiring mid 2010.

But it was to be a short retirement, the industry veteran kept in touch with his former boss and said that he was ready to come back should Langley make a further acquisition in Germany.

"Alfred knows exactly how we work when taking on a new business" said Langley. "...he is a vastly experienced MD who I know can be relied on during the transition between the former institutional management style of manroland AG and the leaner more flexible way that our companies do things"

This press release contains projections for the future based on the well-founded assumptions and prognoses of the management of manroland sheetfed GmbH. Though management believes these assumptions and estimates to be correct, actual developments in the future, as well as actual operating results, may deviate from those put forward by management due to factors beyond the control of the company, such factors to include, for example, fluctuating exchange rates, changes within the graphic arts industry, or any other unforeseen economic and/or market transformations. manroland sheetfed GmbH makes no guarantees that future developments and/or future operating results will match any of the numbers and/or statements put forth in this press release, and assumes no liability if such situations arise. Furthermore, no responsibility is assumed for updating any of the statements and/or figures contained herein.

The legend goes on: manroland sheetfed to unveil many innovations at drupa 2012