The challenge is back 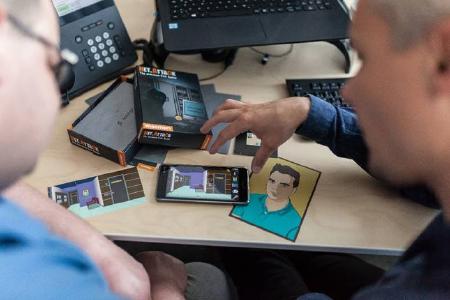 (PresseBox) ( Berlin, 19-07-01 )
Networks are the pillars of digitization. Without innovative Network Access Control (NAC) solutions, it's unlikely that a company can manage or secure heterogeneous networks to meet regulatory requirements worldwide today. But how can the theme be implemented in a playful way and at the same time be equipped with added value for customers and partners? A real escape game brought the sparkling idea. macmon secure GmbH developed as result of this idea the game "Net.Attack - The macmon Exit Game". The great success by partners and end customers in the past year was a good enough motivation to reissue the game. Channel Partners of the network security expert macmon secure GmbH can now order new copies for their customer acquisition and current customer care. The macmon secure marketing team, responsible for the conception and graphic realization of the game, offers partners a comprehensive promotion package. It consists of an event-in-a-box concept, a short video, various graphics, prospects and a package for direct distribution of the game to customers. This is particularly useful for partner and customer events to loosen up with many aha moments.

Christian Anding, Head of Marketing by macmon secure GmbH: "The subject of network security is being addressed very innovatively in a playful way with our escape game Net.Attack. Our channel sales partners have a great opportunity to uniquely position NAC and engage in customer discussions. It quickly becomes clear that macmon NAC is a flexible and efficient NAC solution that can be implemented quickly, while providing significant value for enterprise network security. Because with NAC, a spy just stays out there. "

What do you need to play the game?

The Exit Game consists of an app and a high-quality game box containing the rules of the game and six envelopes with instructions for the tasks to be solved. The focus is on a highly paid spy who is supposed to steal secret research data from a multimillion dollar corporation, which are located on a central server of the data center. On its way to the server room and thus the internal network access, the spy has to solve various tasks in order to overcome the comprehensive security measures. The spy moves from room to room in the app, which he can access only if he solves the tricky puzzles in each room. Some of them are only solvable in the combination of hints in the app and in the game set. The game can be played alone, but also in a team. The duration of the game is about 45 - 60 minutes. Besides the theme as such, the special feature is the combination of the app and the game set. Partners can easily order the game set online directly from macmon secure GmbH and download the app via the Google Play or App Store. Partners simply refer to their partner manager or distribution partner.

A noisy tune into the world of spies can be found here: https://www.youtube.com/watch?v=m-8cUGsPwCk

What is the task?

You are a highly paid and hitherto unrecognized spy and have been hired to steal secret research data from a multimillion dollar corporation. After a thorough research, however, you know that the data are stored only on the central servers in the data center, which cannot be accessed from the outside. The firewalls are good and staggered in several levels. After overcoming the first firewall, honey pots have made it so difficult for you to take further steps that you have almost been stunned. After all, you've been able to identify and embarrass some e-mails, use a link and infiltrate a Trojan that contains various exploits and is likely to be active. Since you are already warned about the comprehensive security measures, you have decided not to set up a direct connection and only communicate within the network.

Your goal is therefore to gain access to the corporate environment and connect directly to the network. In the meantime, your Trojan should have searched the network for building plans to show you the way to the server room. Without an authorized local network access you do not get at it ...

Are you ready for the ultimate challenge?

macmon secure develops network security software, focussing on Network Access Control. Founded in 2003 macmon secure has grown from strength to strength, becoming the technology leader in the field of Network Access Control. Based in Berlin, the macmon NAC solution is fully engineered in Germany. macmon secure has a broad diverse range of customers varying throughout all industries, capturing SMB's, medium sized enterprises through to large international corporations.

macmon's aspiration: Offering every company a flexible and efficient NAC solution. Which can be implemented with minimal effort, adding considerable surplus value for network security.

Zum siebten Mal in Folge haben die Insider-Portale der Vogel IT-Medien ihre Leserinnen und Leser aufgerufen, ihre persönlichen Favoriten unter den IT-Anbietern bzw. -Herstellern des Jahres zu wählen. Gestern wurden die Gewinner der IT-Awards gekürt. read more
The publisher indicated in each case is solely responsible for the press releases above, the event or job offer displayed, and the image and sound material used (see company info when clicking on image/message title or company info right column). As a rule, the publisher is also the author of the press releases and the attached image, sound and information material.
The use of information published here for personal information and editorial processing is generally free of charge. Please clarify any copyright issues with the stated publisher before further use. In the event of publication, please send a specimen copy to service@pressebox.de.