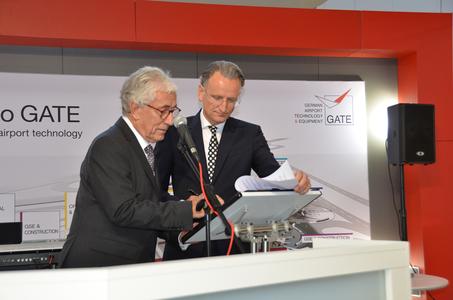 (PresseBox) ( St Albans, 15-10-09 )
At this year’s 20th anniversary edition of inter airport Europe, Mack Brooks Exhibitions has renewed the partnership agreement with GATE, German Airport Technology and Equipment. In the agreement both parties declare to continue their cooperation and mutual support.

“Mack Brooks has worked in partnership with GATE since the very early days of inter airport and we value very much the support, advice and co-operation that has always existed between us. With inter airport events in China and Singapore, as well as the mother show in Germany, it is of course very important to work closely with German airport technology suppliers. As such, we’re delighted to renew our on-going agreement with GATE on the 40th anniversary of the creation of inter airport and we look forward to working together for, at least, another 40 years!” said Stephen Brooks, Chairman of Mack Brooks Exhibitions, the organisers of the inter airport events.

“GATE's airport exhibition strategy gives members and customers high valued orientation on events worldwide, the inter airport Europe in Munich in particular. The cooperation with the organiser Mack Brooks made this event the largest and most popular for the development in the airport industry and gave this trade its own identity in the aviation world,” said Dieter A. Heinz, President GATE.

The official signing of the agreement took place at the GATE stand during the tour of the exhibition on the opening day of inter airport Europe 2015. Stephen Brooks and Dieter A. Heinz signed the new partnership in the presence of Dr Michael Kerkloh, President & CEO Munich Airport and President ADV (German Airport Association) and Ralph Beisel, CEO ADV (German Airport Association). A large number of representatives of the GATE member companies as well as international industry experts joined the ceremony.

inter airport Europe is renowned as the world’s leading event for the airport industry. The show is the first choice for airport operators when it comes to sourcing airport equipment, technology and services for ground handling, terminal operations, airport IT and airport design. With its international audience of industry professionals from airports, airlines, air cargo carriers and aviation support the exhibition offers suppliers to the airport sector a unique international marketing platform. At this year’s 20th International Exhibition for Airport Equipment, Technology, Design & Services, from 6 – 9 October 2015 at the Munich Trade Fair Centre, a total of 676 exhibitors from 44 countries are presenting their products and services. Mack Brooks Exhibitions also holds a series of inter airport events in other regions of the world, such as China and South East Asia.

GATE has been the German umbrella association for airport equipment suppliers since 1992. The association is a contact point and broker for solving infrastructural tasks in the airport sector worldwide. The continuously increasing complexity of logistical challenges, such as information logistics, goods logistics, passenger handling and ground support together with the task of linking them into integrated airport technology, calls for expertise that extends far beyond the skills of a single system supplier. GATE bundles this knowledge by uniting German top software, systems and equipment suppliers and their core skills into one strategic alliance. With their products and services, the associated members of GATE offer integrated solutions for optimum airport infrastructure, from terminal and retail design to ground handling.