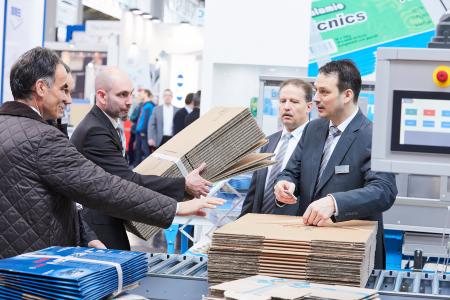 (PresseBox) ( St Albans, 17-03-28 )
The third edition of Europe’s only dedicated Exhibition for the Corrugated and Folding Carton Industry, CCE International 2017, was held last week, from 21 – 23 March 2017, at the Munich Trade Fair Centre. A total of 2,130 visitors from 65 countries came to Munich to discover a comprehensive range of machines, accessories and services for the production and conversion of corrugated and folding carton. Some 150 exhibitors from 23 countries presented their technical innovations on a net exhibition space of 4,700 m2.

“This year’s CCE International was, once again, a highly specialised meeting point for the corrugated and folding carton industry from all over the world. The general atmosphere at the show was very positive; the exhibitors seemed to be particularly impressed with the qualified audience who attended the show. Although we could not attract quite as many visitors as last time, CCE International has by now firmly established itself as the dedicated trade fair for the corrugated and folding carton industry in Europe. The exhibition has grown by 4% in floor space compared to the previous show. Many exhibiting companies increased their stand space this time and put a special focus on live demonstrations of their new and enhanced machinery and systems,” says Nicola Hamann, Managing Director of the organisers Mack Brooks Exhibitions.

Visitors to this year’s CCE International could thus gain a comprehensive overview of the latest technology and industry trends in all areas of the production and conversion of corrugated and cartonboard. In addition, an open seminar held alongside the exhibition offered valuable insight into digital print for corrugated and folding carton applications.

The majority of the visitors at CCE International 2017 came from corrugated board plants and sheet plants. Others were folding carton converters, packaging designers, corrugated sheet feeders, trade agencies and rigid carton manufacturers. The most important industrial sectors that visitors belonged to were corrugated, packaging, folding carton, printing, food and beverage, electrical appliances and electronics, transport and logistics, furniture, pharmaceuticals and cosmetics.

Once again, CCE International had a remarkably high international attendance, where both exhibitors and visitors were concerned. 69% of the visitors and 75% of the exhibitors were from outside Germany. Major exhibitor countries were Germany, Italy, the Netherlands, Great Britain and China. As for the visitors, biggest visitor countries were Germany, Italy, Great Britain, France, Poland, Spain, Austria, the Netherlands and Switzerland.

The co-location of the 10th International Converting Exhibition, ICE Europe 2017, was well received by CCE exhibitors and visitors alike. A total of 429 exhibitors presented their products and services at the leading trade fair for paper, film and foil converting, on a net exhibition space of 11,000 m2. The show attracted a total of 6,850 visitors from 68 countries.

Exhibitor feedback at CCE International shows that most of this year’s exhibitors are already planning their participation at the next CCE International, 4th International Exhibition for the Corrugated and Folding Carton Industry, which will take place from 12 – 14 March 2019 at the Munich Trade Fair Centre in Germany.