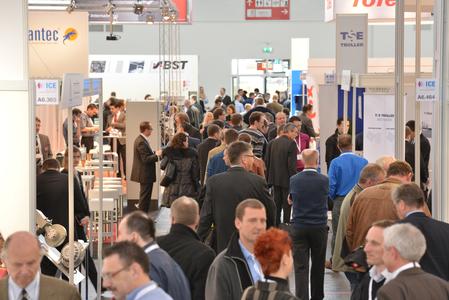 (PresseBox) ( St Albans, 13-03-22 )
The 8th International Converting Exhibition, ICE Europe 2013, closed its doors today after three successful show days full of business activity, live demonstrations, expert talks and networking. With another 16% increase in visitor attendance compared to the previous show, ICE Europe 2013 was the biggest International Converting Exhibition ever: A total of 6,600 visitors from 64 countries came to Munich to find out about the latest products and systems for the conversion of web-based materials, such as paper, film, foil and nonwovens.

“These are of course very positive results; we are particularly delighted to be able to report that ICE Europe has made another step forward as the leading international trade fair for the worldwide converting industry,” says Nicola Hamann, Exhibition Director ICE Europe, on behalf of the organisers, Mack Brooks Exhibitions. “Many exhibitors had presented themselves this year with even more impressive stands. They showcased an enormous variety of new products and innovative solutions, and made this exhibition a magnet for converting specialists from all over the world,” says Nicola Hamann.

A total of 401 exhibitors from 19 countries covered a net exhibition space of 10,100m2, with 41% of the exhibitors coming from outside Germany. The biggest exhibitor countries after Germany were Great Britain, Italy, the USA, Switzerland and France.

The percentage of international visitors at this year’s show was once again very high. Similar to the previous ICE Europe, 44% of all visitors came from outside Germany, with Italy, Austria, France, Switzerland, Great Britain, Poland, Spain, the Netherlands, Czech Republic and Turkey being major visitor countries.

The first visitor analysis showed only marginal variations as regards industry sectors that visitors came from. The majority of visitors belonged to the packaging industry (33%), followed by engineering (21%), the paper industry (20%), package printing (18%), the chemical industry (15%), textiles and nonwovens (13%), the automotive (10%) and the electronics industry (7%).
When asked about their main areas of interest at the exhibition, visitors stated coating/laminating (54%), slitting/rewinding (51%), flexographic/rotogravure printing (29%), accessories (29%), materials (28%), control, test and measurement (26%), finishing (24%), toll coating/converting/slitting (21%) and drying/curing (19%).

A first analysis of the exhibitor survey shows that a vast majority of the participating companies were highly satisfied with the results of the exhibition. They praised the high quality of trade visitors and reported large numbers of business contacts.

The co-location of the new trade fair CCE International, Exhibition for the Corrugated and Folding Carton Industry, was well received by ICE exhibitors and visitors alike. This exhibition launch was thoroughly successful and attracted some 2,000 trade visitors which are not included in the total visitor number for ICE Europe 2013.

Most of this year’s exhibitors had already indicated on-site that they intended to exhibit again at the next exhibition. ICE Europe 2015 will take place from 24-26 March 2015 at the Munich Trade Fair Centre.

The next exhibition in the ICE series of dedicated trade events for the converting industry will be ICE USA, held from 9 – 11 April 2013 in Orlando, Florida. Next year, Mack Brooks Exhibitions will organise ICE Asia, from 17-19 September 2014 in Shanghai Mart, China.