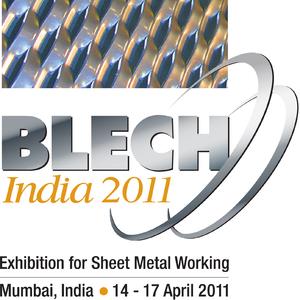 (PresseBox) ( St Albans, 11-05-18 )
With 139 exhibitors from 18 countries and more than 7,000 trade visitors, mainly from India, the second BLECH India, Exhibition for Sheet Metal Working, was a huge success. Held from 14-17 April 2011 at the Bombay Exhibition Centre in Mumbai, the exhibition had more than doubled in size as well as in exhibitor and visitor numbers compared with the launch show in 2009. Participants were highly satisfied, particularly with the comprehensive range of products on display and with the professional flavour of the show. BLECH India 2011 showcased a large variety of machines, tool and solutions for the complete sheet metal forming and fabrication process; an enormous amount of live machine demonstrations was on display.

“We are delighted to be able to report that BLECH India has taken a big step forward in both size and profile. The exhibition has developed into a major quality event for India’s sheet metal working industry since its debut two years ago, and this rapid development corresponds to the fast-paced Indian market for this industry sector,” explains Stephen Brooks, Chairman, Mack Brooks Exhibitions on behalf of the organisers Inter Ads – Brooks Exhibitions (India) Pvt. Ltd.

“We want to congratulate our exhibitors and visitors for this success. There was lively trading activity throughout the four exhibition days and the mood was buoyant. The excellent results of this event show that we have been able to design a highly professional industry platform for India’s sheet metal working industry. A dedicated trade exhibition such as BLECH India is vital for one of India’s key industry sectors in the face of the country’s economic growth potential and the large number of investment projects to cover the ever-increasing consumer demand,” says Rajan Sharma, Chairman, Inter Ads on behalf of the organisers Inter Ads - Brooks.


India – a key growth market for sheet metal working
India is considered one of the world’s key growth markets for sheet metal working. In particular the automotive industry and its suppliers as well as the construction industry are a driving force for continuously positive growth figures. According to recent forecasts, India’s automotive production and retail market will grow by an average of 10% per year until 2019 . Besides, in consequence of recent trade liberalisation measures, such as India’s trade agreement with the Association of Southeast Asian Nations (ASEAN), the country’s export figures for cars and white goods are significantly growing.


BLECH India 2011 receives excellent ratings
It is no wonder that the large majority of exhibiting companies at BLECH India 2011 assessed the market situation for sheet metal working in India as thoroughly positive for the coming years. Half of the exhibitors at this year’s event were companies from outside India, with the majority coming from Italy, China and Germany. The trade exhibition enabled them to gain new contacts and develop their business relations in the booming Indian market.

For the Indian companies important aims of exhibiting at BLECH India 2011 were attracting new customers, presentation of new products and networking with industry experts.

In the exhibition analysis, over 90% of exhibiting companies were able to report positive business enquiries, and 95% of the exhibitors reported that they had achieved their aims. Exhibitors praised the event for the high quality and number of trade visitors, expert talks and contact with potential customers at their stands.

On the visitor side, the exhibition analysis showed that key industry sectors to which the visitors belonged included sheet metal and sheet metal products (53%), mechanical engineering (44%), the automotive industry (11%), iron and steel production (10%) as well as steel and aluminium construction (9%). The show attracted sheet metal working specialists at all levels, with the majority being head of production (41%) or having managerial responsibility (26%).

The visitors rated the show as highly professional and noted the outstanding quality of the products and services on display, in particular the large number of live machine demonstrations.

Information on BLECH India 2013 will soon be available at the show website www.blechindia.com