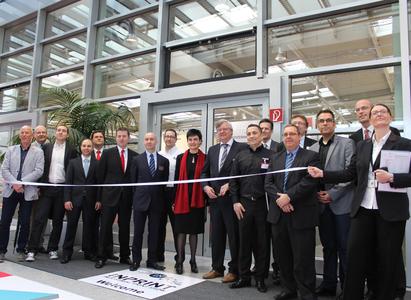 (PresseBox) ( St Albans, 14-05-12 )
InPrint 2014, which took place in Hannover 8-10 April, has signalled the establishment of a new industrial print marketplace by attracting a unique profile of high quality visitors that exceeded exhibitor expectations.

As well as a unique attendee profile, by the close of the show, InPrint had amassed 6,995 individual visitors.

Visitors from the industrial print supply chain attended InPrint from a broad range of industries including: ceramics, textile, packaging, aeronautical, automotive, electronics, engineering, sports-wear, pharmaceutical and printing. Exhibitor feedback confirmed that the visitor quality exceeded expectations from all exhibitors whether they were showing industrial screen, 3D or inkjet printing technologies.

Frazer Chesterman, Co-Director InPrint, explains "The success of the world’s first show for industrial print proved there is demand for a dedicated exhibition for industrial print technology. InPrint benefited from a genuinely unique group of visitors and exhibitors and a high number of new product launches and we are extremely positive about its future potential.”

InPrint 2014 attracted visitors from 61 countries and from outside of Europe including North and South America, Asia and Australasia. Germany represented the largest representation of visitors with 62%, other top 10 leading attendee countries included: The Netherlands, Poland, Italy, UK, Austria, Belgium, Switzerland, France and the Czech Republic.

According to independent show research, findings revealed that 100% of respondents believe that the industrial print sector is growing with 26% expecting growth to be 10% (CAGR) or more. 95% of respondents rated InPrint as a key platform for the future development of industrial print whilst 57.24% of visitors came from the manufacturing and printing industries with additional visitors attending from the world of IT, Research & Development, Technical Consultancy and Publishing.

Marcus Timson Co-Director InPrint, adds, “At InPrint 2014, the InPrint Development Group met to discuss dates and location for the next InPrint Show. It was widely agreed by both Ambassadors and Exhibitors that InPrint had exceeded expectations and that the next event would be best positioned within 18 months of the launch show. With this in mind, we confirm that InPrint 2015 will take place at Messe Munich, 10-12 November 2015 and will be co-located with Productronica, a major international trade show for electronic production.”

InPrint Co-Director, Frazer Chesterman concludes, "InPrint 2014 was not simply another print exhibition. Attendees came from sectors not normally represented at standard graphic or commercial print exhibitions. The show concept, marketing campaign and conference content as well as the large percentage of new product launches all resulted in a launch show that has broken new ground in print exhibitions."


Comments from exhibitors and sponsors include:

"InPrint more than exceeded our expectations and was the perfect platform for the launch of our Xaar 1002 AMp printhead developed for Advanced Manufacturing applications. We have met many people from disparate industries interested in learning about the latest technology developments and exploring new manufacturing opportunities. Industrial inkjet is transforming the manufacture of various products across many markets and the buzz at InPrint proves that this is the right event at the right time. The future is very exciting." Mark Alexander, Xaar

"InPrint 2014 can be described as the right show at the right time. The interest from the industry has been exceeding our expectations with a very busy Agfa stand as a result. This is the kind of shows where you don't mind having missed lunch." Tom Cloots, Agfa

"Fujifilm showed ink, printhead and systems integration technology at InPrint and the show was an outstanding success with keen interest shown by a great many new customers." Jon Harper-Smith, Fujifilm

“We found the show most useful, with high quality leads from decision makers across a range of industries. This was exactly what we had hoped for from InPrint, and we feel our investment as a founding sponsor was well justified. We look forward to InPrint 2015!” Tim Phillips, Xennia

“Being an ambassador means that you have to believe in innovation. Industrial print is not only on the rise in the graphics industry, but also in many other vertical markets. The organisers of InPrint2014 have therefore picked their momentum perfectly to organise InPrint 2014. The Mimaki booth was buzzing with many new high quality vendors interested in the industrial print applications. The close proximity of Hannover Messe 2014 also enabled us to reach out to other markets and introduce them to the benefits print has to offer. InPrint 2014 has proven to be a new venture for the print industry, challenging the imagination of attendees, Mimaki is proud to have been its ambassador.” Mike Horsten, Mimaki

“For a first time show it delivered much more than we had expected - right from the start. We have been extremely pleased with the level of customers showing up from various industries with very specific interests in mind - all across from industrial inkjet, screen, & pad printing segments. Being very active in industrial print applications for decades, we embraced the idea of InPrint immediately and contributed in early developments meetings shaping the content inclusive taking on an active ambassador role. Well done and looking forward to the next InPrint Show!” Friedrich Goldner, Marabu Printing Inks