The similarities of Texas Tea and milk, ink-jet inks and ceramics 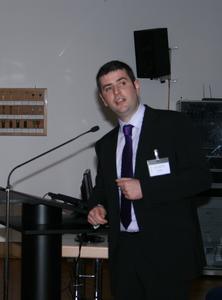 (PresseBox) ( Berlin, 11-08-02 )
The »International Workshop Dispersion Analysis« was held in Berlin-Adlershof, Germany. The event was organized and sponsored by LUM GmbH, a leading producer of innovative instruments for direct and fast stability analysis and particle characterization of dispersions. The event was addressed to users from all kinds of industry as well as scientists.

Prof. Dr. Dietmar Lerche, Chair of the Scientific Committee and Managing Director of LUM GmbH, Germany, launched the event with an introduction about the genesis of the workshop, which had its first run in 2004 and warmly welcomed more than 66 participants from over 10 countries.

The first lecture was given by John Tobin, from the Irish Agriculture and Food Development Authority. Tobin talked about two dispersed systems, skimmed milk and microparticulated whey protein, which where supplemented with konjac glucomannan respectively inulin mimic possibly some of the properties of full-fat milk to enhance their physical properties, e.g. viscosity, but with the added challenge that both can possibly have a deleterious effects on solution stability. The Stability Analyser LUMiFuge® was used to conduct accelerated tests by centrifugal field with different batches containing added modified konjac. The incorporation of modified konjac into UHT skimmed systems reduced their tendency towards sedimentation, that means it increases stability.

As second speaker, Dr. Hans-Jörg Oschmann from Champion Technologies, Netherlands, addressed aspects of development and stability assessment of dispersion-based products as well as their practical application in the oil industry, namely high-active paraffin inhibitors for subsea applications. Paraffin-related problems in the oil industry are mainly depositions on all kinds of equipment (like pumps), since petroleum fluids contain a large quantity of paraffin. Depending on the amount and composition of paraffin, cooling of the crude oil during production can result in precipitation of paraffin crystals, which can adsorb on surfaces resulting in deposits and will decrease the separation velocity of the fluids. To overcome these problems, dispersion-based paraffin inhibitors are applied and must be assessed for long-term stability. Oschmann and his colleagues used the Dispersion Analyser LUMiSizer®, an analytical centrifuge which is able to perform measurements up to 2300 g and thus is much faster than the bench testing up to now normally used.

Visual observations confirmed that both assessment methods identified the same paraffin-composition as the most useful one. The correlation of accelerated test with real-time demixing behaviour is proven. Oschmann concluded that both methods will be used concurrently, as they supplement each other, but that general trends can be predicted from the much shorter centrifuge measurements.

On a general note, Markus Feist from the Karlsruhe Institute of Technology, Germany, spoke at length about the sedimentation of unsteady particle systems, which are part of many industrial production processes. Especially for those systems, a challenge in analysing is how to reach defined and reproducible initial conditions.

One example dealt with the settling behaviour of fibres. Because of hydrodynamic effects, fibres tend to build clusters and agglomerates during their sedimentation process and settle much faster than a single fibre. The Separation Analyser LUMiReader® was chosen as instrument-of-choice to determine the settling velocity in relation to the crowding of the sediment. Comparison between conventional sedimentation equipment and LUMiReader® results confirmed the agreement between both sedimentation velocity, highlighting the LUMiReader® advantage compared with visual observation by naked eye.

Conny Roedel from the IKTS Dresden, Germany, spoke about concentrated dispersion analysis in ceramic processing. He identified the focal point of research of his department as the analysis of complex interactions between different additives and powder surfaces. Roedel then presented examinations of qualitative and quantitative effects of commercial available additives (dispersant, binder, lubricant) on the properties of alumina suspensions, which were obtained using direct and accelerated stability measurement. This method provides more comprehensive results in contrast to zeta-potential measurement. The LUMiSizer® results are subject to a publication in a peer-review journal by Roedel et al.

Maksym Loginov, who presented a teamwork of scientists from Compiègne University of Technology, France and the Institute of Biocolloidal Chemistry, Kiev, Ukraine, posed the question 'Can we use the LUMiSizer® to estimate filterability of concentrated suspensions?' They examined the use of analytical centrifugation for evaluation of compression-permeability properties of concentrated bentonite and calcium carbonate suspensions. Classical methods for analysis are dead-end filtration and compression-permeability cells, but they only allow one sample at a time, whereas the LUMiSizer® can process up to 12 samples. Two methods for the evaluation were proposed based on the analysis of experimental data, the dependence of the sample height on the centrifugation time, and the dependence of the ultimate sample height on centrifugal acceleration. The values of specific cake resistance estimated from centrifugal consolidation for both suspension types agreed with the values estimated from dead-end filtration tests (especially, in the low pressure region ps < 20 kPa). This opens a new application field for LUMiFuge® and LUMiSizer®, the prediction of dispersion filterability.

Dr. Peter Prochnow from ACMOS Chemie, Germany, showed hands-on examples of ACMOS's quality control (using the LUMiSizer®) with the goal to determine stability of dispersions, stability of emulsions and controlling of raw materials. Prochnow explained further how important the fast and easy characterization of their dispersions is, firstly due to the 8500 tons of products per annum using 600 different raw materials, secondly due to a most broad spectrum of customers, which range from steering wheel suppliers to kitchen utensil ones. He singled out the oil-processing industry as example for their successful steady and reliable quality control by means of a LUMiSizer® and stressed that worse stability of the release agent can cause a precipitation in the annual piping which means high investment increases.

Joao Ricardo from Ydreams, Portugal, a global company dealing with proprietary technologies such as augmented reality and others (think of interactive display technologies that can be applied on virtually any object or surface, like hologram effects on a bottle), spoke about stability of ink-jet inks. The use of the LUMiSizer® was considered because sedimentation velocity values can be measured at specific accelerations which enabled the analysts to make a comparative study between many different inks and differentiate between formulations of the same ink. The different inks can now be tested at different accelerations without having to run time-consuming measurements at gravity.

Last but not least, PD Dr.-Ing. habil. Michael Stintz, member of the research group mechanical process engineering from Technical University Dresden and Chair person of the German Standardization Committee (DIN) on "Particle Characterization", talked about the standardisation work of the ISO/TC 24/SC4 'Particle Characterisation' and especially about the new working group 16 'Characterization of particle dispersions and liquids' that addresses the characterisation of stability of dispersions, like suspensions, emulsions, and mixtures of each other first steps towards the standardization of stability behaviour of dispersions.

All released workshop papers are available for free download from the information portal www.dispersion-letters.com.

The 2011 International Workshop on Dispersion Stability was considered a big success and motivated by attendees' inquiry the next workshop will be organized in Berlin from 1-2 March 2012.