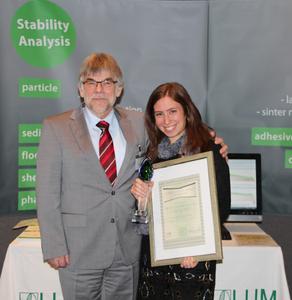 (PresseBox) ( Berlin, 14-03-06 )
One session of this year's International Workshop Dispersion Analysis and Materials Testing in Berlin was dedicated to the Young Scientist Award (YSA) 2014. For the first time, LUM GmbH called for prize applications to broaden its support and commitment in promoting young researchers from universities and academic institutions all across the globe for outstanding scientific results in particle characterization and dispersion analysis.

"On behalf of all workshop attendees and the entire jury, I would like to thank all applicants.", Prof. Dr. Lerche, scientific chairman of the conference and president of the jury, sums up. "The best four aspirants were invited to discuss their interesting results with the 80 participants from 24 countries."

Suzanna Azoubel from Hebrew University Jerusalem, Israel, presented her results from the "Formation of Carbon Nanotube Dispersions and Their Rapid Characterization". In a very graphic talk she illustrated the use of the Stability Analyser LUMiFuge for the determination of the sedimentation velocity of dispersed nanotubes under different processing conditions, like high pressure homogenization. The easy handling of the LUMiFuge and the short analysis time have clear advantages for the quality control of CNT dispersions, compared to other analytical techniques, e.g. microscopy, light scattering or thermo gravimetric analysis.

Laleh Solhi from Iran Polymer and Petrochemical Institute focussed on the stabilization of nanoparticles in dilute dental adhesives (nanoclays) against unwanted segregation. Aim of the investigations is the improvement of the physico-mechanical properties of dental adhesives used in dentistry. Here, the Separation Analyser LUMiReader is applied for the determination of the sedimentation behaviour of different products.

"Probing the Stability of Sterically Stabilized Polystyrene Particles by Centrifugal Sedimentation" qualified Huai Nyin Yow from the University of Leeds, UK, for the final round of YSA candidates. In her talk the attention was put on colloidal dispersion stability. The presentation was given by her supervisor Prof. Simon Biggs, due to her absence caused by illness. The capability of the LUMiSizer was documented for the characterization of rheological properties of suspensions with polymer decorated "smart" particles.

For the contribution "Dense colloidal fluids form denser sediments" Shir R. Liber from Bar-Ilan University, Israel, was awarded Young Scientist 2014. In the laudation jury president Prof. Dr. Lerche highlighted the extraordinary high importance of the work for the characterization of the packing behaviour of many different materials. Shir Liber, M.Sc. student, proved a high scientificity in her paper and an extremly high expertise during the talk and discussion. "We are pleased, that Shir Liber gained new scientific findings using the LUMiFuge, one of our analytical instruments, in a rather academic application field. By awarding her with the prize, we would like to support her scientific top-performance in the future.

LUM GmbH will call for applications for the Young Scientist Award 2015, to continue with the promotion of young researchers from universities and academic institutions all across the globe.", Prof. Lerche terminates his speech.