Mr. Silverman has over 30 years of leadership experience in private and public companies across multiple segments of the healthcare industry. Currently he serves on the board of several early stage companies, including Chairman of Kiyatec, Inc., and as an Operational Partner with Gilde Healthcare, which recently closed a $285 Million fund. Mr. Silverman has considerable executive level experience in the diagnostic and pharmaceutical industry from his previous roles at Abbott Laboratories, Pasteur Merieux Connaught, Cytyc Corporation and mtm Laboratories. At mtm laboratories, an in vitro diagnostic company developing and commercializing tests for the detection and diagnosis of cervical cancer, he was instrumental as CEO in creating a successful business enterprise that resulted in the acquisition by Roche for $270 Million. He received his Bachelor of Science degree in Pharmacy from the University of Michigan, and a Master in Management from the JL Kellogg Graduate School of Management.

“On behalf of Lophius, I am pleased to welcome Bob on board. Bob has extraordinary business and operational expertise. Management and the board will greatly benefit from his broad experience as a value creating executive and as a strategic advisor in the diagnostic industry”, said Prof. Ralf Wagner, Chairman of the Lophius Biosciences Supervisory Board.

“The disruptive and proprietary technology platforms of Lophius enable the development of novel solutions in the emerging field of T cell based diagnostics. The potential exists to address significant unmet market needs, and this is greatly facilitated by the extended funding. I look forward to being a part of this exciting opportunity and to support this effort”, commented Bob Silverman, Member of the Lophius Biosciences Supervisory Board. 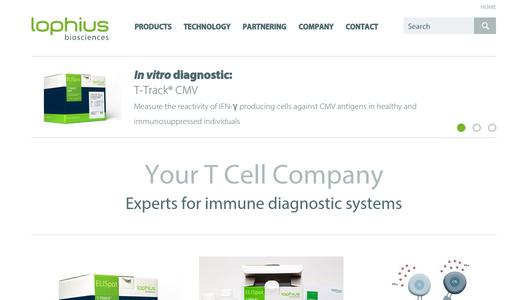 Lophius Biosciences is a privately-held German biotechnology company focusing on the development and marketing of innovative immune diagnostic systems to improve therapy control and personalized treatment of patients in the area of transplantation, infectious and autoimmune diseases. The company's developments are based on its expertise in cell-mediated immunity as well as on its proprietary T-activation® and Reverse T Cell Technology platforms. Whereas the T-activation® technology platform allows an efficient stimulation of a broad spectrum of clinically-relevant immune effector cells to accurately measure the cell-mediated immunity, the Reverse T Cell Technology platform can distinguish between active and memory T cells to develop innovative diagnostics.

With its T-Track® CMV leading product, Lophius offers a highly sensitive, reliable and standardized CE-marked in vitro diagnostic solution to measure the functionality of CMV-specific cell-mediated immunity. T-Track® CMV assists clinicians in the risk stratification of CMV disease in immunocompromised patients, toward an improved and individualized patient management.