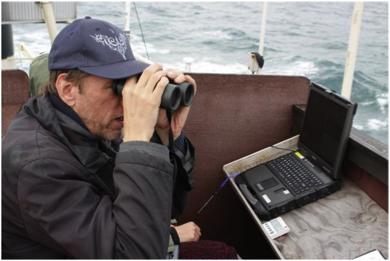 (PresseBox) ( Munich / Paris, 13-06-03 )
LOGIC INSTRUMENT, one of the world's leading manufacturers of rugged mobile computers, pioneers on the high sea. Around the first offshore wind power plant in Germany, important environmental compatibility data are collected - with the rugged mobile computers from LOGIC INSTRUMENT the researchers can capture their data even under the worst environmental conditions.

Since April 2010 the Alpha Ventus, Germanys first offshore wind power plant, is online. The wind farm is located 45km (27mi) northwest of Borkum in the German economic zone and a total of twelve wind turbines provide electricity for 50,000 households. Since the Alpha Ventus is Germany's first offshore wind farm, there are numerous analyzes and investigations all around this pilot project with the regard to future offshore plant constructions and operations. Particularly the environmental protection is kept under close observation as the open sea and coastal areas are important and worth protecting habitats for numerous animal species.

During the analyzes, IBL Umweltplanung GmbH from Oldenburg, an environmental planning office, deals with the changes of the living conditions of marine mammals as well as resting and migrating birds in the area around the power plant. The scientists collect the relevant data directly from their ships while they particularly are exposed to harsh weather conditions. Waves, strong winds and water spray not only complicate the work of the environmental scientists, but also demand a high level of ruggedness from the technical equipment.

The company therefor has decided to rely on the rugged notebooks V100 and B300 from LOGIC INSTRUMENT that guaranty to resist the for mobile computers unusual harsh weather conditions. In addition, the notebooks are equipped with an integrated accurate GPS to track the exact positions where the researchers had collected their data and through the specially developed software they can transmit their findings directly from the ship to the centralized database even under the most adverse circumstances - so Logic Instrument's rugged notebooks contribute to a significant increase of efficiency for the work on the high sea.

LOGIC INSTRUMENT is an ISO-9001 certified manufacturer of rugged mobile computers since 1987 with major facilities in France, Germany and the United States, focused on markets that need high level of ruggedness and environmental protection. Logic Instrument stands for complete customer specific hardware solutions that fit to 100% to the application.

Logic Instrument products are designed, tested and manufactured to MILSPECs, IEC and NEMA standards and are developed on 3D solid modeling systems optimized for direct interface with our 7 axis milling machine that allows rapid prototyping and manufacturing of customer specific special components. Systems are assembled, tested and verified in accordance with our ISO-9001 certification.

Um Rechenzentren fit fürs AI-Zeitalter und für die Zeit ohne Kohlendioxid-Emissionen zu machen, stellte der chinesische Infrastrukturlieferant Huawei eine ganze Reihe neuer Technologien vor. Sie reichen vom Datacenter-Bau bis zur Datenvernetzung.. read more
The publisher indicated in each case is solely responsible for the press releases above, the event or job offer displayed, and the image and sound material used (see company info when clicking on image/message title or company info right column). As a rule, the publisher is also the author of the press releases and the attached image, sound and information material.
The use of information published here for personal information and editorial processing is generally free of charge. Please clarify any copyright issues with the stated publisher before further use. In the event of publication, please send a specimen copy to service@pressebox.de.